General Chat with an emphasis on BMC Minis & Other iconic cars of the 1960's. Includes information on MK1 Action days.
Post Reply
554 posts

Moreton in Marsh
You do not have the required permissions to view the files attached to this post.
Last edited by steve65 on Fri Jan 14, 2022 9:29 pm, edited 1 time in total.
Top 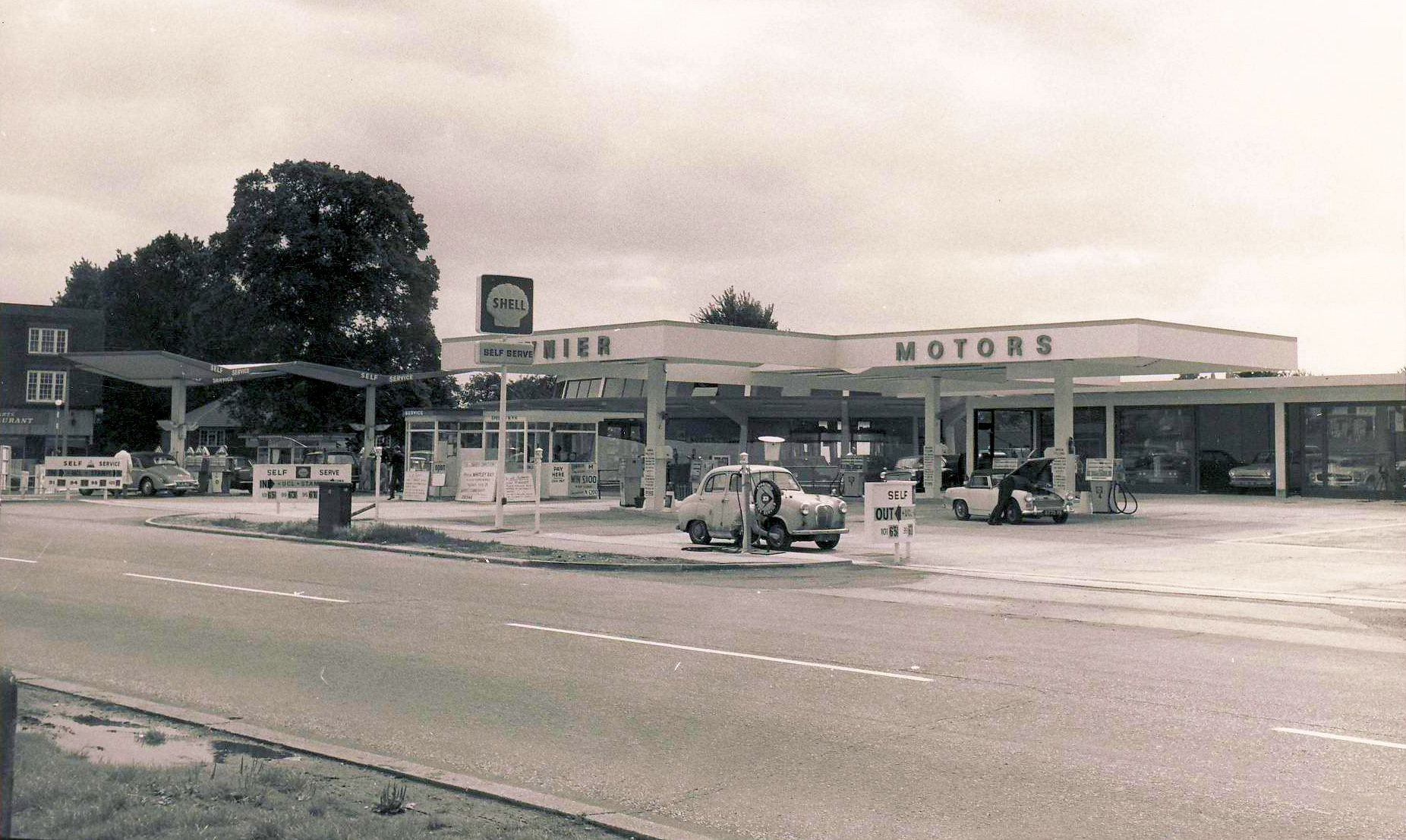 Advertised in 1961 as the Dawnier Motors Ltd. showroom, the building now known as Ewell Honda was designed by William H Arend & Son using the expertise in reinforced concrete of Truscon Ltd.
The showroom faces out onto Ewell by-pass, at the corner with London Road (the main route through the centre of Ewell). Ewell's by-pass was built in the early 1930s to divert traffic around the outside of the village. The growth of car ownership in the inter- and post-war years led to the construction of by-passes to alleviate congestion, and with by-passes came buildings catering to the needs (and desires) of passing motorists; petrol filling stations, road houses and car showrooms sprang up along their route.
Ewell Honda, a motor car showroom of 1961 by William H Arend & Son, with engineering by Truscon Ltd, is designated at Grade II for the following principal reasons: * Architectural interest: it is a stylish building which uses its portal frame construction to create a striking futuristic aesthetic; * Rarity: the building is a rare example of an ambitious and architecturally successful post-war motor car showroom.
https://historicengland.org.uk/listing/ ... al-listing

The futuristic Grade II listed 1960's showroom building is rather hidden in the old photo above but it was a BMC/BL Garage and showroom in the 1960/70's, I grew up nearby and remember as a kid BMC Works Minis occasionally on show in the showrooms and later brand new unregistered MK3 Cooper S's lined up outside amongst rows of the recently launched more mundane Mk3 Minis and Clubmans waiting for buyers. 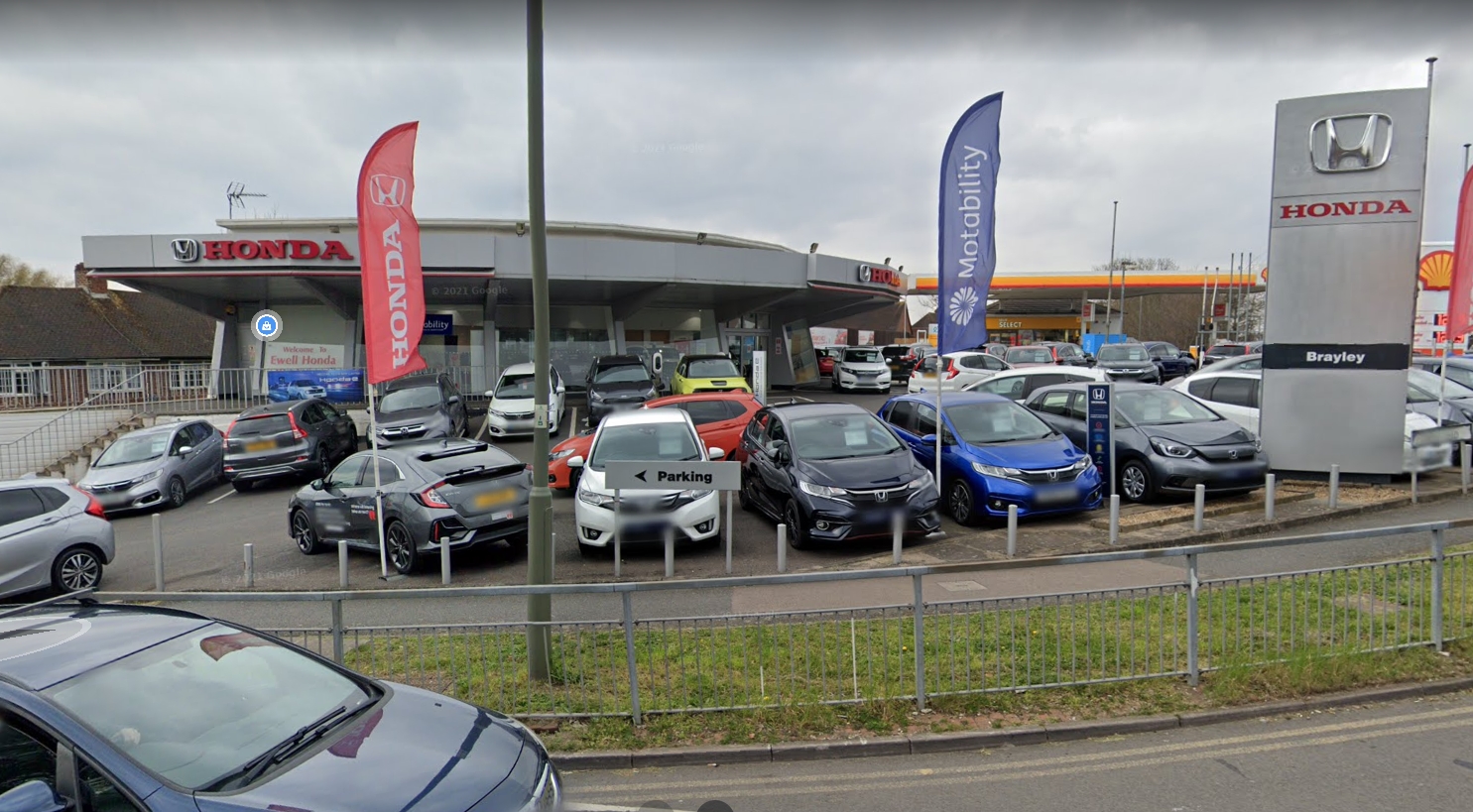 Dads first Allegro DDD49T came from Cutts of Campden & my first MG Metro!, but I can’t picture the garage in Moreton which would have been closer!?!
Cheers

The old Organ Inn Roundabout, Ewell before it was replaced by the busy traffic light controlled crossroads of today.....the Grade II Listed 1961 built car showroom building of Henlys British Leyland garage in the (left) background is now a Honda dealer as stated in previous post above.
A Morris Ital attempting to keep on the heel of an MG Midget exiting the roundabout. On the forecourt there are two examples of the Austin Maxi, a Rover SD1, Princess, a Triumph Dolomite & of course a Mini. 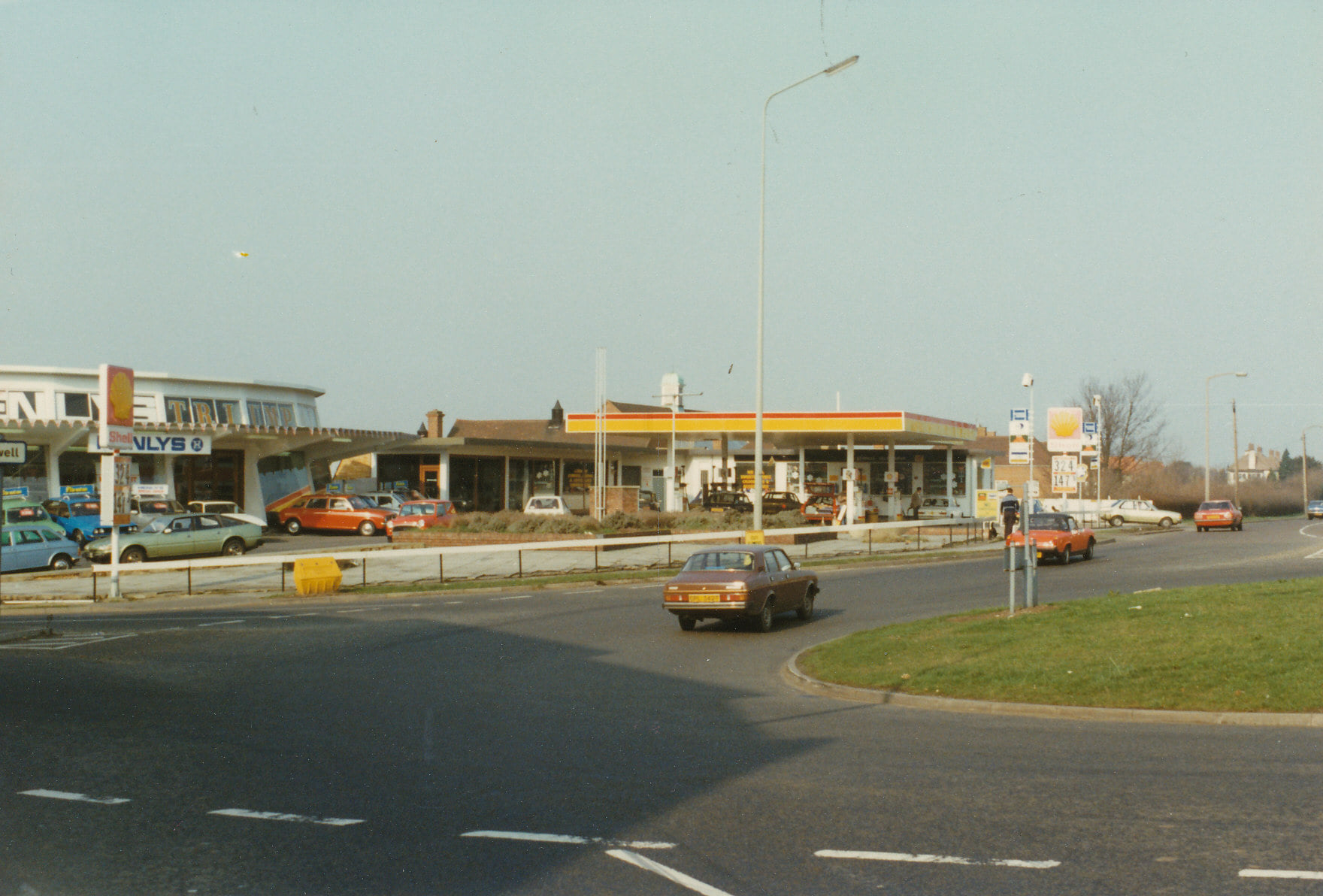 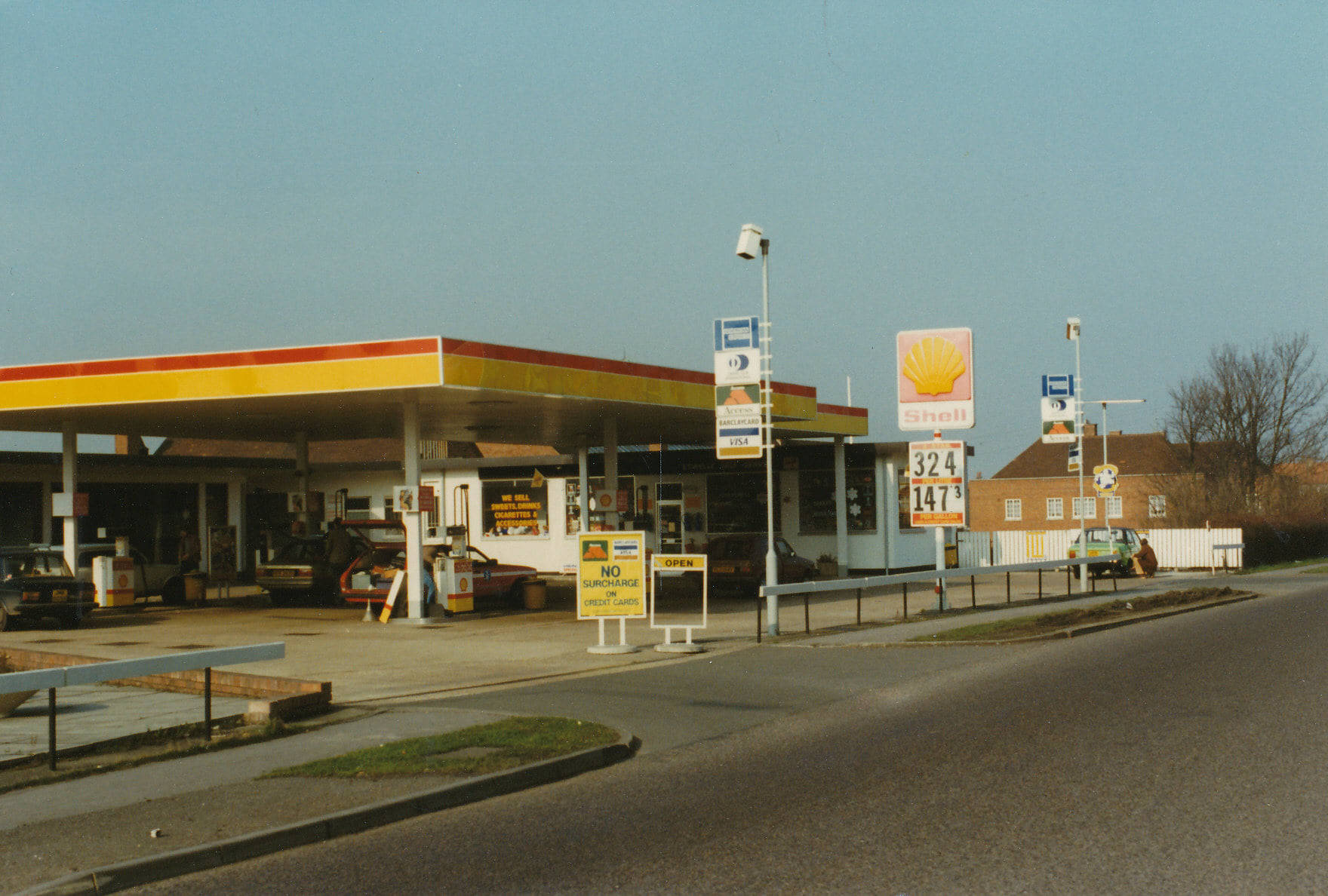 Dads first Allegro DDD49T came from Cutts of Campden & my first MG Metro!, but I can’t picture the garage in Moreton which would have been closer!?!

It was on the right hand side of London Road as you head out of Moreton - I think it, and the industrial estate behind, is all housing now. This 970S was there in the early 1980's
AHY 990B.JPG
You do not have the required permissions to view the files attached to this post.
The power of accurate observation is commonly called cynicism by those who do not possess it.
Top

Got it! The Cotswold Casements building places it for me
Cheers

DBE05326-B503-47A0-8EEF-F868ED8552AF.jpeg
A trio of Mk3 S’s from South Herts region of the original MCC rendezvous at East Sheen Alfa Garage in Upper Richmond Road West in January 1981, prior to going on to Ferring to visit John Cooper’s garage.
East Sheen Garage is now a branch of Bathstore.
Photo shows Colin Maynard in the left, Arni Wookey and myself.
Please, no comments about the vinyl roof on my Teal blue S, it was the girlfriend’s (now wife) idea as she was the main driver and she thought it looked great! It was sold two years later along with my immaculate Almond green S which one of the last Mk1 1275’s, due to us needing a deposit for our first house. Fortunately I had two other Mk1 S’s, one of which I still have today.
My Teal blue S still survives but DVLA show it has had a colour change and is now Red. Arni’s Aqua S seems to have disappeared from the DVLA records but Chris Anstey’s Bronze S is still alive somewhere. Chris took this photo.
You do not have the required permissions to view the files attached to this post.
Top 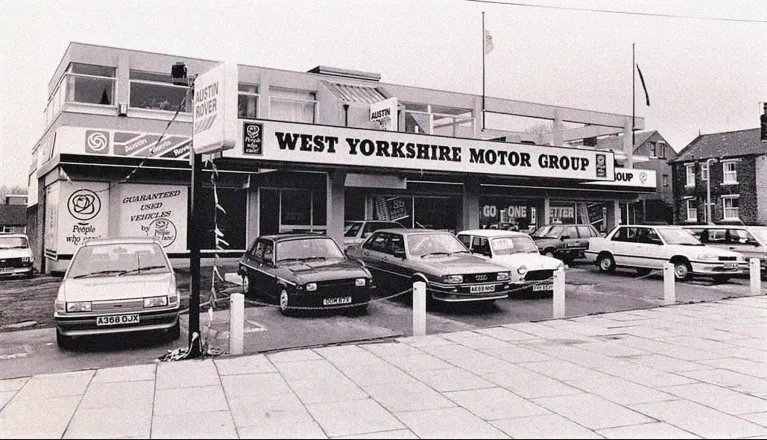 "It’s March 1985 and we’re standing kerbside in Stanningley, near Leeds. We find ourselves looking at one of those small family-owned dealerships that seemed to be part of every community back then, despite many manufacturer’s (including British Leyland back in Filmer Paradise’s era) desire to close them down in favour of larger, out of town gin palaces. Today, that battle has largely been won, but back in 1985 dealers such as West Yorkshire Motor Group were still very much the norm."
Memories : Stanningley, Leeds, 1985:-
https://www.aronline.co.uk/opinion/leeds-1985/
Top

What a great thread this is, some of the art deco garages were (and if remain) are still wonderful peices of architecture.

Are there any Downton images of the buildings today?

and also any of HA Saunders/Mann Egerton at Whetstone/North Finchley N12. I spent many a weeks hard earned cash in that establishment. I was always served by Nick who was a wonderful patient parts man - and I recall where Keith Dodd (of Mini Spares fame) cut his teeth before going out on his own at a premises on the North Circular.
Top
Post Reply
554 posts