General Chat with an emphasis on BMC Minis & Other iconic cars of the 1960's. Includes information on MK1 Action days.
Post Reply
16 posts 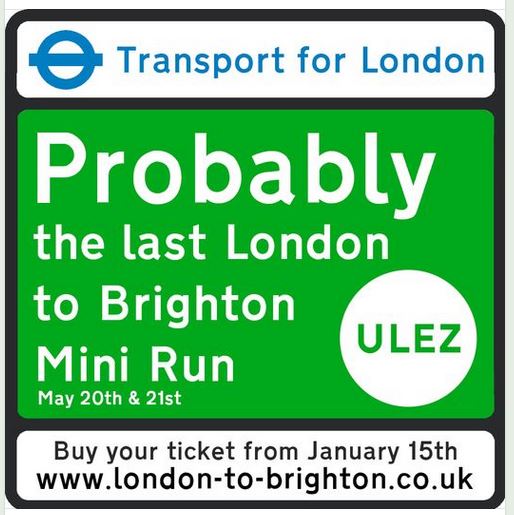 While it probably won't bother many of us based on earlier comments about the L to B run.....but the London and Surrey Mini Owners Club (LSMOC) has announced 2023 is probably going to be the last London to Brighton Mini Run due to the extension of the ULEZ zone by the London Mayor, which from August will be expanded to cover last years new starting point in Cheam, Surrey which is in an outer London borough. It probably won't be long before Brighton has one too with the Green Party in control of the Council.
Historic tax vehicles are exempt from the ULEZ charge but LSMOC say the majority of classic Minis that were entered for the 2022 event were NOT classified as exempt/historic. There are also other reasons for this probably being the last event and LSMOC say these will be expanded on later but to give an idea the phenomenal costs/administration that are involved in the running of this two day event are not compatible.
https://www.facebook.com/groups/londont ... onminirun/
Top

That is very sad news.

Sounds like a combination of factors all of which (or at least similar versions of them) will affect us all in years to come.

Classic car owners will soon be an endangered minority, I'm not holding my breath for Government support though, maybe if we all started wearing frocks

I'm going to identify as a Hillman Hunter.
Top

Very, very sad.
My first L2B run was in 1996 in a 1980s Mini City with 10" wheels. I owner from new - an undertaker!. Then my 17 year old son learned how to drive using drum front brakes and diary to stop in time! Those were the days. He enjoyed many early driving experiences. Just like I did as a teenager. He decided that I should drive there and back from Crystal Palace on the country roads. "Bending the rules & Ruling the bends."
Didn't we have a lovely time we went to Brighton! and back
What I remember most of that trip was a Mini dropping all it oil on entering Brighton and the commaraderie of all the Mini owners to helo out and sort the problem.
There was one year when with Rog the Hat when we stayed overnight in a cheap B&B but I don't think we will ever go there again, Nuff said.
Top

I think the London Mayor would much prefer you identify as a Tesla or a Nissan Leaf....although as a Hillman Hunter you will be ULEZ exempt/historic.

If there is a 2024 L2B Mini Run they will probably have a DVLA inspector at the start checking any electric classic Mini conversions for 'illegal' drilled or welded up holes which will result in your run ticket being cancelled immediately....
As a marketing opportunity BMW could also offer a generous 'scrappage' discount for any classic Mini traded in before the off, for a brand new BMW MINI Electric....with a range of 'up to 145 miles' perhaps the Green council in Brighton could also be persuaded to install rows of fast chargers along Madeira Drive for those with a longer journey home.

Here are a few tips that can help to extend your MINI Electric range:-
https://www.mini.co.uk/en_GB/home/range ... range.html
Top

But will there be enough charging points in Brighton for the MINI?
Top

I am from Essex
Top

Reported in the Mail today:-

Will Sadiq Khan's car pollution tax drive classic race off the road? ULEZ expansion threatens annual London to Brighton Mini Run?
From August 29, the zone will be expanded to cover the start in Cheam, with the worst polluting cars charged £12.50 a day.
Although exemptions are in place for some classic cars, one organiser said around half of the run’s regulars would be hit by a two-day charge since many motorists camp overnight.
He added: ‘We already have to sell tickets for £45 and not many will be willing to pay £70 to take part.’
https://www.dailymail.co.uk/news/articl ... -road.html
Top

Latest statement from Croydon Mayor Perry on ULEZ expansion.
"Croydon Council strongly opposes Sadiq Khan’s plan to expand the Ultra-Low Emission Zone. Khan’s plan will not only force hundreds of Croydon residents to pay £12.50 a day just to drive their car, but his own studies show it will have very little environmental impact. “Alongside other outer London authorities, Croydon is exploring options to legally challenge this flawed expansion. We will also be resisting attempts by TfL to use our lampposts and street furniture for ULEZ signage and cameras."
https://news.croydon.gov.uk/statement-f ... expansion/
Top

Looks to me like the closure of the L2B is a choice, not something that is being forced on anyone.