General Chat with an emphasis on BMC Minis & Other iconic cars of the 1960's. Includes information on MK1 Action days.
Post Reply
15 posts

What difference would a webber carburetor make to a GT fitted with twin su in relation to performance and would it be easier to tune one webber rather than the usual twin su set up?
Rob
Top

Suppose question is what do you want to use car for ?

Weber 28/36 is a good road solution….often over looked.
Top

Only fast normal road use.
Top

The other question would be what type of Webber do you have in mind.

If you are thinking of a DCOE, the only way to get the best from it would be to cut the bulkhead and fit box so the carb and inlet manifold can have favourable runs. Bear in mind that cutting the bulkhead could lead to all sorts of problems with the DVLA saying your car has been cut-up and is no longer what it was.

If you do decide on a DCOE, once set up with the correct jet, emulsion tubes, venturies, idle jets, etc, etc, it would be easier to maintain than a pair of SU carbs.
https://mk1-performance-conversions.co.uk/mk1_index.htm
Top

SU's are certainly better on the road than a DCOE, it will be more economical when set up correctly, & quieter too, but as Exminiman said, a 28/36 DCD is a good bet too.
Mark F
https://mk1-performance-conversions.co.uk/
Top

I have a Dellorto DHLA on my modified 1100 engine (and also had it fitted to the stock 998 previously). It’s essentially the same as a Weber DCOE and uses the same manifold and air filters.

I use:
Warneford/Redline manifold
Ramflo filter
90 degree speedo adapter
This all fits fine with no bulkhead mods 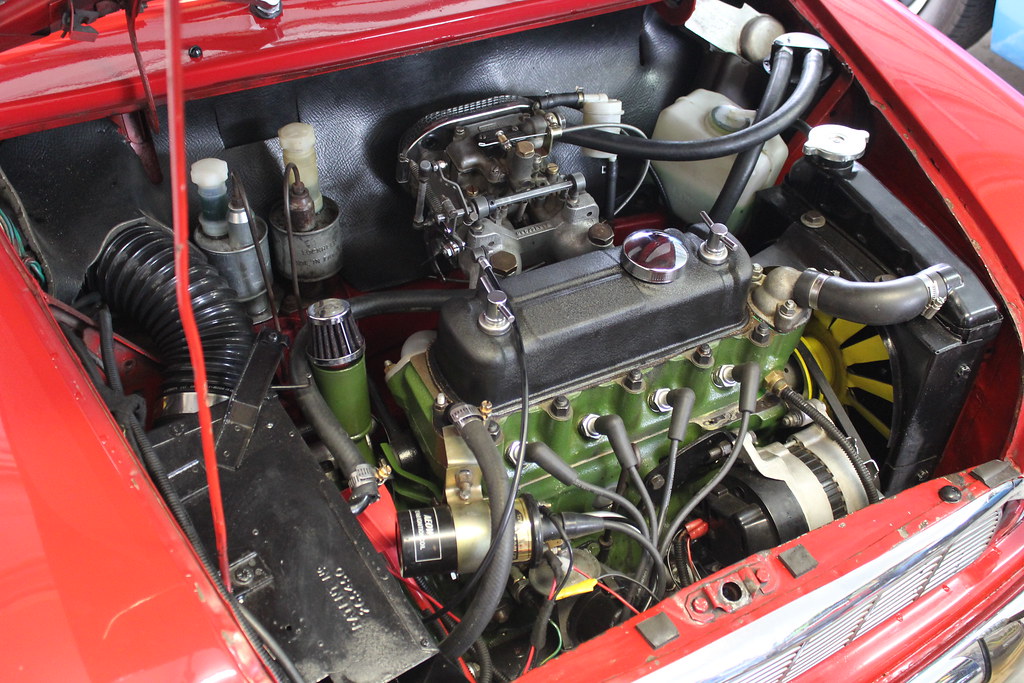 The only downside for me is it can be a bit loud on a long trip. The bulkhead insulation in the photo above makes it acceptable, but it’s still louder than the equivalent SU

Honestly I loved it on the stock 998 engine. It probably wasn’t any faster, but it sounded awesome and had really good snappy throttle response. My friend had a bunch of jets so I spent a few months with the afr gauge getting the tune sorted and it ended up pretty economical in the end. It made absolutely no sense, but it just made me want to drive it all the time as it was so much fun!

At the moment on the 1100 engine it’s still been running great and it’s very much a set and forget kind of thing. I did run twin HS2 for a while and overall performance was about the same, but the SU carbs were a lot smoother and less responsive

Like any carb, if it’s in poor condition or not tuned properly it’ll give poor results.

In my experience I’d definitely recommend you give it a go, as long as it’s what you really want and can get it tuned up properly. Minis don’t have to make sense, you are allowed to do things you enjoy even if they are a bit silly

Hey Robbie, if I'm not mistaken your car currently has twin HS2 (1.25") carbs, that's if I'm remembering correctly from when I saw the car at Port Solent at while back.

If it's simply ease of tuning, maintenance, and a decent level of "fast road" performance you're after, I'd suggest a single HIF44 (1.75") SU carb mated to a good aftermarket manifold might be a better alternative to a Weber in terms of noise levels, economy, maintainability, and driveability. The picture below is a useful reference when comparing different SU carb setups and their performance potential.

I emphasise the word potential because it's possible to "over carb" an engine - just because a carb is capable of 100hp, doesn't mean you'll get it, unless all the accompanying engine specs are there to match. For that reason a well setup HIF44 is a popular choice for many "fast road" Minis as they're good for standard 1275s with 50+hp, right up to more highly tuned motors into the high 90's and beyond, when dialed in to suit.

However, if you're wanting to do something a bit more unique and perhaps "in period" for your early GT without butchering your firewall, then a Weber on a swan neck manifold (much like the picture timmy101 shared) is certainly an option. They look good and do make a great induction noise, if that's your sort of thing!

All that said... are you noticing any issues with your current setup? Twin SUs aren't intrinsically problematic if they're in good condition, and while you might not be getting the absolute maximum performance from your engine in terms of raw numbers from your current 1.25" carbs, they're far from a bad choice. And personally, I think twin SUs look great in a Mini engine bay, especially an early one like yours


And the Warneford/Redline manifold. It’s a much better flowing design and still fits without bulkhead mods
CFB86554-11F8-4DB0-AE75-CD1C52970508.jpeg
You do not have the required permissions to view the files attached to this post.
Top

That's a very useful comparison, I've not come across your manifold design before - it's certainly far less of an aggressive bend compared to most "swan necks" as you say, maybe more of a "goose neck"

That's a very useful comparison, I've not come across your manifold design before - it's certainly far less of an aggressive bend compared to most "swan necks" as you say, maybe more of a "goose neck"

Mine has about the same vertical offset as a single SU manifold, but much less horizontal offset from carb to port. The more recent ones have improved ports and capable of +100hp so there’s no compromise like the “swan neck”.

#dontcallitaswanneck
You do not have the required permissions to view the files attached to this post.
Top
Post Reply
15 posts