AROnline Memories : a scrapyard in England, 1991

General Chat with an emphasis on BMC Minis & Other iconic cars of the 1960's. Includes information on MK1 Action days.
Post Reply
20 posts

Plenty of used spare parts in the scrapyards for Minis back in the day.....now they would be ebay 'barn finds'. 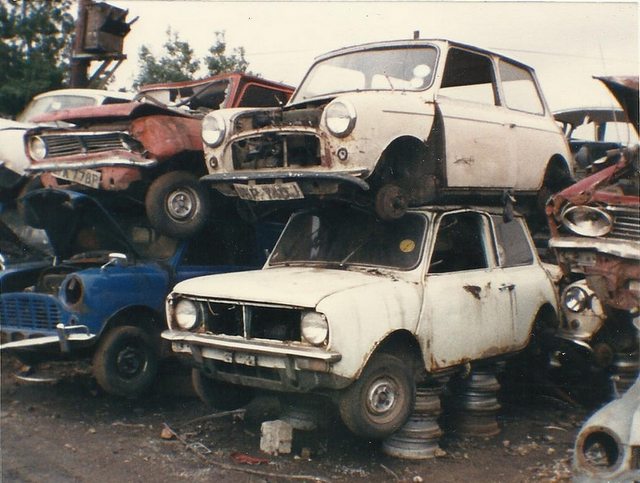 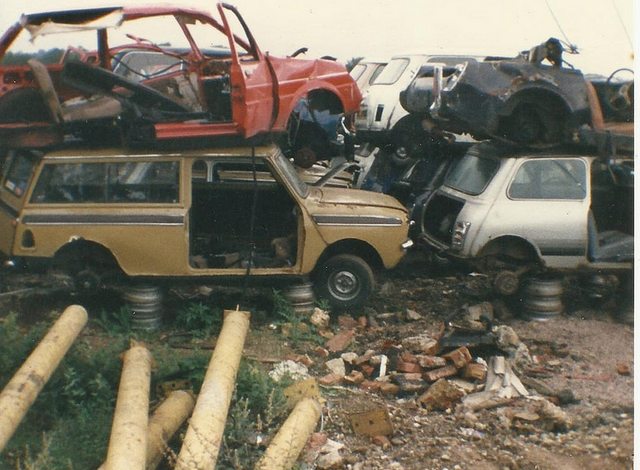 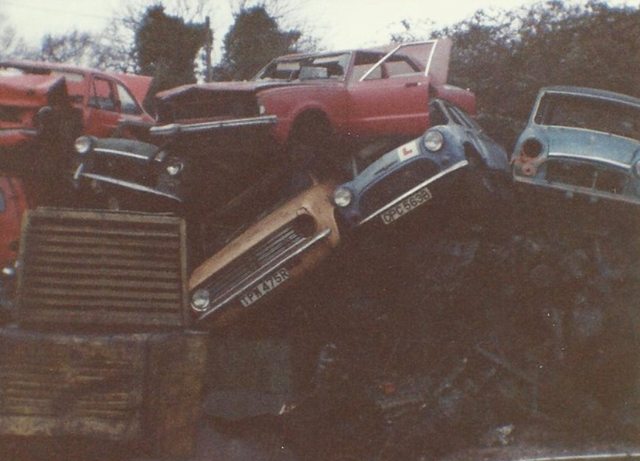 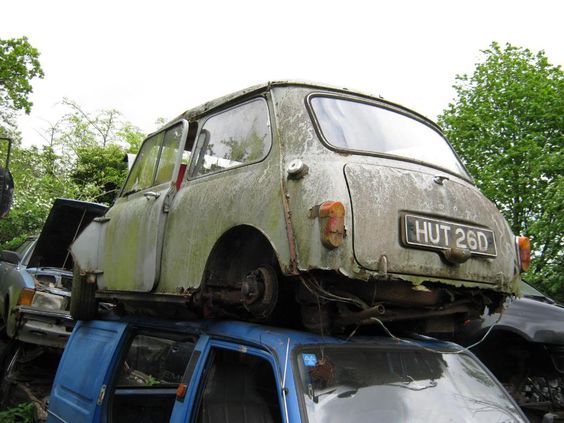 Brother as a Student worked for Greenwoods Scrapyard near Cowley Oxford .. one job was to pick up a Crashed Police Panda MK1 Escort when these were very new on the streets .. when he got back to the yard with this Escort the Police were already there persuading the Scrappy that they could have back the Escort Alternator as this was a rare item back then.
Top

Oh yes. I also remember Greenwoods (at Garsington). They were quite an organised and tidy yard weren't they. A friend of mine still has a sidevalve Morris Minor which he purchased from them for £30.00 in the 1970s!
I remember the Oxford Police having those Mk1 Escorts as Panda cars - and thinking it seemed a strange choice when the Morris factory was so close-by. They also ran very plain looking Mk2 Lotus Cortinas I recall.
Top

I favoured Hughes in Bicester (stupidly expensive) or better still, Smiths in Bloxham near Banbury. I still use that yard today after 35 years.

I went on holiday to Scotland in 2014 with my Mrs, her friend and my MIL, all in a 3 Series Touring (estate). On the return journey, I dropped the ladies off in Edinburgh to do all that shopping shit and I went on a mission to U Pull It in Inverkeithing. I had of course brought a tool bag and I got some BMW morsels.

Because the car had 40/60 split rear seats I was able to slide the wing in, cover it over and get everyone back to Sheffield. The wing was £30 and was sold swiftly for £300.
Top

Our local scrappie which these days is full of seemingly nearly new cars stacked very neatly on metal racking used to be a right old dive, run by a pair of very dubious brother you wouldn't want to meet down a dark alleys. My first car, a 1977 Belgian built Mini 1000 ended up there in 1990 and used to taunt me as I could see it sitting on top of a stack of other rusting hulks from the railway line, then one day it disappeared. The poor thing died on me on the way to an Iggy Pop gig in Brum. Ironically some of the components in it came from the same scrap yard!
Nidge 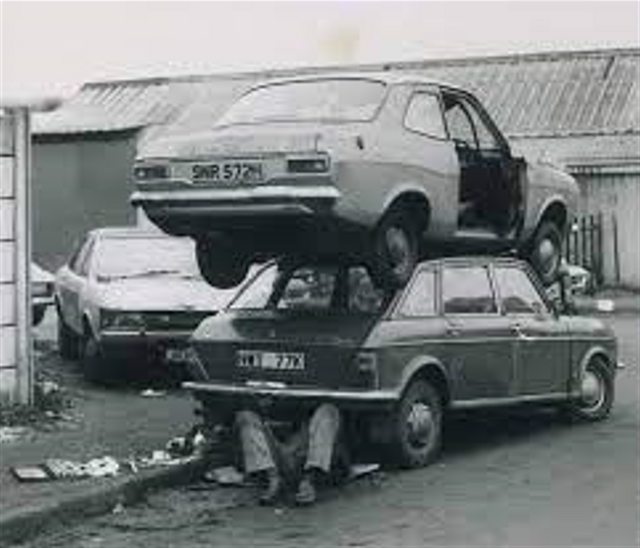 Brilliant pics. Used to love going to our local scrap yard and climb on cars stacked 3 or 4 high to get a pair of SU’s and a 295 head from an MG 1100 or something like that….servo from a Hillman Hunter…..
Funny how my toolbox was twice as heavy on the way out too

The yard is now a new housing estate…..
Top

Cor, this thread brings back some memories. Growing up in central Somerset, the best local scrappy was Cross Keys at Lydford on Fosse - still going to this day it seems.

Memories of getting there just before a pickup was crushed and having enough time to get the tailgate, rear windscreen, and the pull-over catches for the rear tilt to use on mine. Also collecting the whole front end of another scrapper from the windscreen forward for the donor engine & box - gently placed into the bed of my pickup - which made it sit down a bit!

There was another, smaller place outside Somerton - VRS now - that I got a pair of Mk2 doors from with the "simple" use of a bolster chisel and heavy hammer to get through the A panels. Only as I was on the way home did I think "why didn't you knock the pins out of the hinges?"

There was another one (between Wellington & Taunton I think) that a mate said had a whole MG 1100, or 1300, in so I toddled over for a look. Asked how much for the head & carbs to be told "the whole engine & box or nothing, someone's already interested!" I queried this as a rod was through the block.
The scrappy's face was like thunder as he tore out to check I wasn't trying it on. Turned out some lad before me had said he was interested, got it running and revved the nuts off it, throwing a rod. He'd left with a "will go get dad & his trailer" and obviously scarpered.
The scrappy was so livid and raging that I also quietly sloped off as I didn't think asking for the head now would be a good idea!
Steve
Top

We were well served round these parts too. Big one up the Drayton Road where a fair bit of ST stuff went, Passeys in Kiln Road Newbury and a good one in Standlake that had cars piled 3 or 4 high - if you were brave!

I kept MSM 130F going via Passeys..... Good times. I see that there's some plush houses on the site of the Standlake scrappies. I bet they don't realise that under the 6" of top-soil, it's an oily ecological nightmare
Top

63Traveller wrote: ↑Wed Jun 22, 2022 4:59 pm Cor, this thread brings back some memories. Growing up in central Somerset, the best local scrappy was Cross Keys at Lydford on Fosse - still going to this day it seems.

I used to go there with my old man. The first time would be 1974 when a friend of my Mum ran their 1968 2 door 1100 for too long with the idler gear hanging out - the swarf destroyed the crank.

But no problem. Cross Keys was known for having loads of cars. Dad rang up, was quoted £15 for an engine and box so off we went in a borrowed 7cwt Escort Van from Somerton where we lived then.
Upon arrival, we were directed towards a beige 63-64 Mark 1 Austin 1100 that had just come in - the engine was still warm and sounded good. £15 changed hands, the 1100 was flipped over, a gas axe through the exhaust and driveshafts and out it came in 15 minutes or so. Whilst this was happening we had a wander down the yard - I was about 7 at the time. Mark II Jaguars, loads of early Minis, Anglias etc etc.

The engine was an absolute cracker as well - the owner had to get used to a three synchro box though.

There was another yard further up the A37 plus Smiths at Badgers Cross in Somerton that didn't have a decent 1100 engine that week. That's now VRS - it was established in 1966 and the first car in was a Riley Pathfinder that remained in the back corner until the mid eighties. Again, my first trip there was with my Dad, towing a scrap 1962 Mini there with a hoist equipped Land Rover in the mid seventies.
Top
Post Reply
20 posts