General Chat with an emphasis on BMC Minis & Other iconic cars of the 1960's. Includes information on MK1 Action days.
Post Reply
90 posts

My overalls came from Les Leston's shop, which was a short walk from my office....
Scottish 73.JPG
You do not have the required permissions to view the files attached to this post.
Top

Working from a small garage in Cambridge, Don Moore first came to prominence in the 1950’s racing his lightweight P Type MG. He soon developed a great reputation as a tuner & builder of racing saloons from exotic Italian thoroughbreds to the humble Mini.

Having won the BTCC Saloon car Championship in 1960 with Doc Shepherd’s A Series Powered Austin A 40. Don was the first person to gain a reputation for being able to make the new BMC baby go a lot faster & amazingly last the distance of a whole race. This made him the tuner of choice for the first generation of Mini racers including Christabel Carlisle & John Whitmore. Once again winning the BTCC Championship in 1961with John Whitmore. In these early days Don Moore prepared cars were certainly the ones to beat.

In this period Don was effectively BMC’s tuner of choice, working closely with the Comps Dept & the experimental engines Dept. in Coventry. This arrangement however, was not to last. By 1963, Daniel Richmond & Downton were in the ascendency & begain to take over where Don Moore had started.

Don Moore continued to run Mini’s throughout the hey day of 1960’s saloon car racing. But never again with the success that he saw in the early days.

By the late 1960’s like so many other tuners, Don had abandoned the Mini in favour of more competitive machines like the New Ford Escort. Don Moore retired from racing in the mid 1970’s, but continued to run his garage until the early 2000’s.

M is for don moore.jpg
You do not have the required permissions to view the files attached to this post.
Mark F
General dogsbody.
Top

Kees
DOWNTON Mini is what I like a lot.
Collecting 60th wooden steeringwheels.
Top

Steve Neal joined the Equipe Arden team in 1965. His debut was at Oulton Park, where he claimed points in the main Mini Cooper battle. He started off with a bang, with a podium finish, but that was his only notable finish in that first season.

During his time at CCC, Steve proved his speed, claiming a second (and final) victory at Crystal Palace. Neal was regularly finishing on the podium in Class B and could have beaten John Rhodes that year, ultimately being foiled by two retirements towards the end of the season.

Neal stayed with Cooper after they lost factory backing, joining up with new Britax-Cooper-Downton team. He partnered Gordon Spice for a year, ultimately missing a race to help Spice in his outside chance & ultimately futile bid to win the class title. Neal became frustrated during his time driving for the Britax Downton Cooper team & ultimately decided to retire.

Steve returned to racing in the early 1990’s as team principal of the hugely successful “Team Dynamics” & has run a very successful Works Honda team for many years. His Son Matt becoming BTCC champion in 2005, 2006 & 2011

Steve Neal is one of the few racing drivers from the golden days of the Mini who is not prepared to even talk about his time driving for Arden, CCC & the Britax Downton Cooper Team. Leading some to speculate that there is an interesting story to be told one day.

g-spice-s-neal.jpg
You do not have the required permissions to view the files attached to this post.
Mark F
General dogsbody.
Top

Oselli are undoubtedly one of the very few great survivors of the tuning industry.

Started by David Oldham & a friend in 1962, grinding heads in his Mum & Dad's garage, this Oxford Based tuning firm went from strength to strength. Moving to larger premises on a number of occasions throughout the 60's & 70's with a thriving Mini based business funding this impressive expansion.

As the Mini business died down new opportunities opened up eventually leading to Oselli becoming specialists in high value British Sports cars. A business they are still involved in today. Although David Oldham retired & sold the business in the mid 1990's, Oselli continue to thrive today.

In recent years Oselli have worked with David Brown to develop the David Brown Oselli edition, one of these new highly modified minis that seem to be popular with certain wealthy car enthusiasts.

21-20.png
You do not have the required permissions to view the files attached to this post.
Mark F
General dogsbody.
Top

The Oselli modified 998 Cooper of Searle Siemssen/Barbara Sabey on the 1970 RAC (me in service crew). The engine went on to live in the 998 Mini of Merv Manning with me as co-driver (pictured in the Les Leston thread above, on the 1973 Scottish).
RAC 70.jpg
You do not have the required permissions to view the files attached to this post.
Top

Re LMM76C,s pic of the Les Leston overalls my cars reg is 9618PH but its a dead reg so will have to settle for age related plate

Throughout the 1960's BMC produced some of the most wonderful advertising posters. These were always drawn by in house artists / draughtsmen & printed by Nuffield Press, one of BMC's "little side lines".

Here are a couple of my favourites.

BMC Powerpack.jpg
aus-coop.jpg
You do not have the required permissions to view the files attached to this post.
Mark F
General dogsbody.
Top

Throughout the 1960's BMC produced some of the most wonderful advertising posters. These were always drawn by in house artists / draughtsmen & printed by Nuffield Press, one of BMC's "little side lines".


Nice pic below of a BMC drawing office in the good old days. I was an Engineering draughtsman 'on the drawing board' for many years, sadly I have lost most of my manual drawing skills due to using 2D & 3D CAD since the late 1980's. The young engineers I now work with find it hard to believe that we designed such complex things without the aid of a computer......I retire soon and hope to never again have to use a 'new improved' CAD software update! 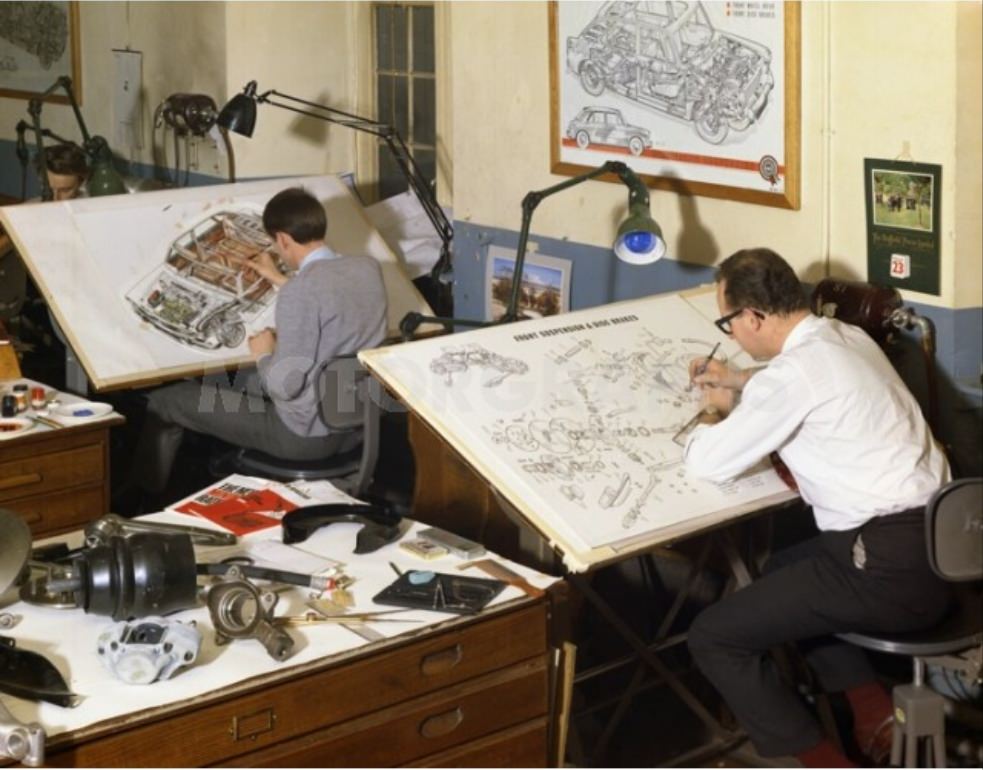