General Chat with an emphasis on BMC Minis & Other iconic cars of the 1960's. Includes information on MK1 Action days.
Post Reply
104 posts 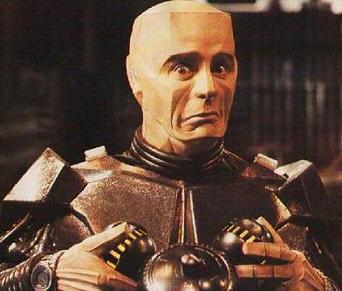 A word to Janspeed:
Jan's son was funnily spelled Kieth. He was killed at a DTM round at the AVUS in Berlin when Audi pilot Frank Biela hit him right into the driver's door. I think this lost broke Jan's further ambitions somehow.
First law of thermodynamics: don't talk about thermodynamics!
Top

K is for Kangaroo, The Morris Mini-K 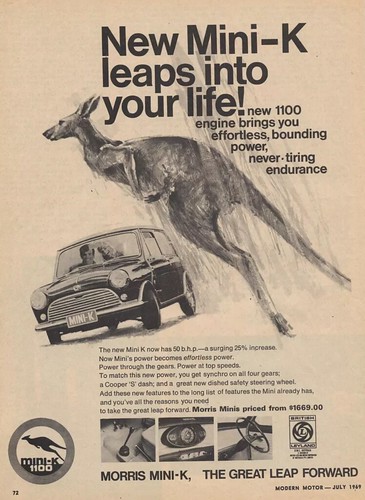 Mini K & Karobes were about the only two I could originally think of.
Mark F
General dogsbody.
Top

JKD, were another small engineering company with it's roots going back to the F3 500 revolution immediately after WW2 The eponymous owner designing his first full racing car in these early days. However, before too much longer his flair for designing & building good quality, strong gearboxes & axles
at a sensible price was recognised by John Cooper.

JKD & CCC worked very closely together for many years with JKD developing & manufacturing gearboxes & related equipment for many of Cooper's single seaters. There was of course an inevitable wash over into the manufacture & production of gearboxes & parts for the BMC Mini Cooper. Amongst these are the very first LSD used in a Mini, the venerable & much maligned Cam & Pawl. These by modern standards were very notchy & could make a car very difficult to drive at low speeds, but gave a distinct performance advantage at high speeds. JKD also developed the first straight cut dog engagement gear sets for a Mini as well as a very early 5 speed.

Throughout the 50's, 60's 70's & 80's JKD's reputation was absolutely outstanding with them offering an ever increasing range of mainly transmission & steering parts for customers both private & large international businesses, with much less focus on Cooper & BMC.

However, by the 1990's & the re-awakening of interest in the Mini & Mini Cooper created by sales in Japan, JKD had a final golden period, developing and marketing their own twin cam head & a much more robust 5 speed box based on the later rod change case. This reawakening was however short lived & the company was sold.

In more recent times JKD has been involved in a number of minor scandals where people who have simply bought the Company name have tried to capitalise on the history of this once great company, but have offered sub standard parts at "knock off" prices. These recent shenanigans have undoubtedly tarnished what was once a great name in Motorsport, but at least the memory remains.

jack-knight-2.jpg
You do not have the required permissions to view the files attached to this post.
Mark F
General dogsbody.
Top

It was after the crash in Caen that he pioneered the development & marketing of flameproof overalls. At the time many racing drivers were still wearing short sleeved shirts. Les Leston overalls became the norm for Grand Prix drivers in the 1960's wity the likes of Graham Hill & Jim Clark wearing them for many years. Graham Hill also appeared regularly in Leston's adverts sporting the Leston made Graham Hill rally master jacket.

from his profits in the accessory business Les Leston lived the high life of an international jet setter for many years eventually settling in Bexhill where he died in 2012 at the age of 91.

L is for Les Leston.jpg
You do not have the required permissions to view the files attached to this post.
Mark F
General dogsbody.
Top

Thanks for this story, the steeringwheel Monte type is my favourite.

Kees
You do not have the required permissions to view the files attached to this post.
DOWNTON Mini is what I like a lot.
Collecting 60th wooden steeringwheels.
Top
Post Reply
104 posts