A section dedicated to non Mini related conversations that some members may find disturbing, worrying or offensive. If you are likely to be troubled by non Classic car related content, I would suggest you avoid!
Post Reply
7 posts • Page 1 of 1

That was a fun video...Thanks
Top


DINO 308GT4 COZY POWELL.jpg
You do not have the required permissions to view the files attached to this post.
Nidge

George Harrison with his first car. 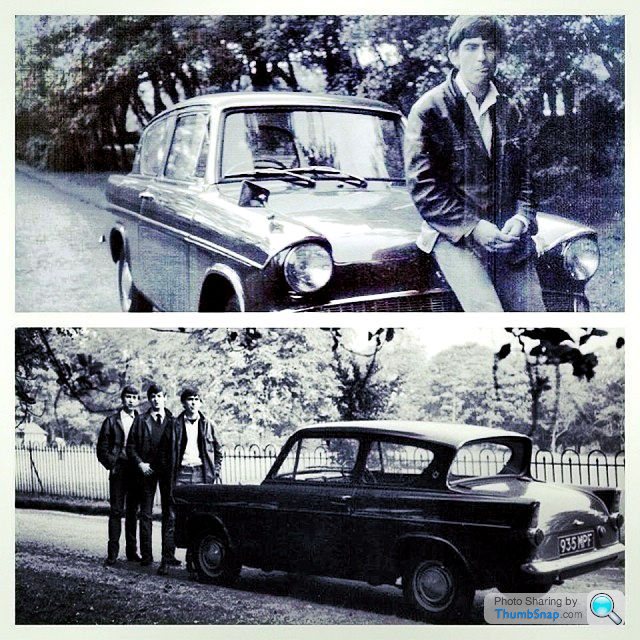 That Anglia was George’s dads car, which was sold to him by Epstein’s motor trade mate Terry Doran when he sold cars in Merseyside and is in the Brydor ledger.

I sold the Brydor ledger in the end to Kieron who runs Rockstars cars, it was more hassle than it was worth to keep it with people sharing and selling copies of it all over the place, mainly due to the idiot Beatles memorabilia dealer I bought it off selling copies despite an agreement he wouldn’t. He’s now had to sell the copyright back of the only images he made of it to Kieron himself which are now owned by him, so essentially any images of the ledger out there are now copyrighted and owned by Keiron. (This has stopped the sale of copies and if any are found to be changing hands they’ll potentially end up in court).

The ledger first appeared on EBay a few years ago as a Buy It Now sale. I couldn’t believe my eyes when I saw it. I informed a couple of people I know who I knew would really appreciate the ledger but neither pressed the button so to stop a Beatles collector buying it and it vanishing into a private collection forever I pressed the button myself and bought it. I’m really glad I did because it blows so many widely believed myths into the weeds about the Beatles cars.

Kieron has some great contacts in the music biz and is doing a great job researching the book through them. He even pointed out that the number scratched on the cover in biro is that of Andrew Loog Oldham, who has several cars in the book including a Hooper Mini. Really looking forward to seeing what he does with it.
Top

You did the right thing with that ledger, Pete. Both in securing it, and then moving it on to exactly the right guy.

We all know what happens when information like that, which would help others in their research, falls into the hands of folks who for whatever reason won't share it, or at least won't share it transparently. Nobody wins, and it just causes confusion and frustration in what is meant to be a hobby.

Some of the photos Kieron has shared are amazing.

Christian Horner offered to buy it but I’m glad it didn’t go to him in the end, plus the offer was ‘pish’. It would have just disappeared. At least this way it will be researched, shared and enjoyed by someone who is passionate about the subject.

The really sad part of this story is that by the time I got the ledger Terry Doran was already in poor health and couldn’t be contacted. He passed away last year and all his memories and stories went with him. He was an essential cog in the Beatles story, there from the very beginning with Epstein and with the band members throughout, even managing Harrison’s affairs in the early 70s and a very private man as many of the Beatles entourage were. I really hope his story is told one day, there’d be a good film in it.

One member of the forum was particularly pleased when I showed him proof that his car had been bought by George Harrison from new, a car I’d previously passed on.

. It was also an essential but bitter sweet reference informing another Radford owner (when asked) that the Beatles history written about his car by experts and magazines over the years was not confirmed by the ledger at all.

I probably sold it for peanuts considering the millions some of the cars are now worth in the book but I’m glad it’s gone where it’s gone.
Top
Post Reply
7 posts • Page 1 of 1