Smart motorways in the news again....

A section dedicated to non Mini related conversations that some members may find disturbing, worrying or offensive. If you are likely to be troubled by non Classic car related content, I would suggest you avoid!
Post Reply
27 posts

I have drifted through life for a while while on the motorways and have had a few chats with my passengers.
We had decided that those Smart motorways roadworks would have something to do with offering electronic support to autonomus cars or better feedback to sat nav apps or some similar space age progress.

Why didn't I realise that!
Top

I’m a regular M6 user of the wretched section just north of Birmingham. I’ve been hit twice by foreign HGV’s who like to think it’s a fun sport by intimidating cars especially in the contra flow sections.
After the first incident (on the contra flow)I’d been shunted down the middle lane by a Lithuanian truck (driver probably on a 20hr day)because he hadn’t seen the car that had stopped in the inside lane until it was too late. So hitting me was a 10mph shunt instead of a 60 mph head on (I would estimate about 75% of all HGV’s speed on the 50mph limited sections).
When I got to the second services afterwards (1st one was to try and get drivers credentials from someone who didn’t speak a word of English,that was fun,he had a babelfish type app on his phone) I went and found a cop to find out what needed to be done ‘Nothing. It’s you against him,what do you want me to do about it’he said. Raging by this point he then pointed out.
‘How do you think WE feel ? Absolute carnage is a common sight along here and ourselves and the emergency services have no way of getting to the front of the now 3 mile queue because there’s no hard shoulder’. Hadn’t thought of that.
Later on I contacted my insurance company to inform them of the fun days’ events and they said ‘unfortunately despite the fact you have fully comprehensive insurance with business use we treat collisions with foreign HGV’s as your liability even if you aren’t at fault(you pay excess,lose NCD,get a crap hire car whilst yours is in for repair etc etc)because we have virtually 0% chance of retrieving any monies from the HGV operator.This isn’t just how my insurance company operate either it’s ALL of them (no surprises though !)
Do you think the world’s gone bonkers ?
Top

Nothing worse than being in a contraflow in the dark and rain with a foreign HGV sitting on your rear bumper who has no chance of stopping if anything happens ahead, you can't escape because of traffic in all lanes and speed cameras through the road works mean you can't away accelerate to safety either. To make matters worse the protracted road works are usually caused by the conversion to yet another stretch of dangerous 'Smart' motorway widening on the cheap...

Also never stay in lane alongside a foreign HGV sitting in their blindspot, always pass as quickly as possible and only when you can see clear space in your lane well beyond the truck. Side swipes into cars from LHD trucks are very common in Kent where HGV's are travelling to/from the Channel Tunnel and Ferry Ports.
Top

mab01uk wrote: ↑Tue Feb 16, 2021 8:18 pm Nothing worse than being in a contraflow in the dark and rain with a foreign HGV sitting on your rear bumper who has no chance of stopping if anything happens ahead, you can't escape because of traffic in all lanes and speed cameras through the road works mean you can't away accelerate to safety either. To make matters worse the protracted road works are usually caused by the conversion to yet another stretch of dangerous 'Smart' motorway widening on the cheap...

Also never stay in lane alongside a foreign HGV sitting in their blindspot, always pass as quickly as possible and only when you can see clear space in your lane well beyond the truck. Side swipes into cars from LHD trucks are very common in Kent where HGV's are travelling to/from the Channel Tunnel and Ferry Ports.

You’ve just described incident no2 to a tee,within a fortnight of the first one. Car didn’t look too fancy after second one (my skid pan training came into good use though !)
Portugeuse one this time with no camera or even a mirror on rhs.
‘Three strikes and your out ?’
Only got 32 days of work left before retirement and hope the luck holds out !
Top

On the two occasions I got tailgated,or cut up by HGVs on the M6 recently one was a U.K. food tanker and one was a lunatic Royal Mail juggernought. I reported both of them, the RM driver to the police. Bearing in mind I was doing about 54 in a 50 but that just wasn’t fast enough for him so I got the flashing lights, the horn, the bumpdraft, the lot. I reckon thousands are getting speeding tickets for being pushed along the M6 or M1 by trucks at the moment. How the truckers get away with it I have absolutely no idea. That’s not to say cars and vans aren’t speeding, but you don’t get pressured to do it yourself by them driving up your arse.
Top

A good way to waste another £5 million on smart motorways?....

A year ago Transport Secretary Grant Shapps demanded better information for motorists as part of an 18-point action plan to improve public confidence in smart motorways, which have no permanent hard shoulder.

"The Pet Shop Boys and singing flies are part of Highways England's £5 million campaign designed to improve safety on smart motorways.
An advert was launched urging motorists to “go left” to find a layby or verge in the event of a vehicle fault on a smart motorway.
The advert, featuring two flies on a windscreen singing an adapted version of the Pet Shop Boys’ Go West, was billed as the “biggest ever” campaign by Highways England to promote safety on motorways"
https://www.youtube.com/watch?v=zDfdQlSBc6Q

Advice from Highways England as part of its announcement includes ‘put your left indicator on and move into an emergency area, onto a hard shoulder, motorway service area, left-hand verge or A-road lay-by’ and ‘on a motorway without a hard shoulder’.
The announcement does not include advice on what drivers should do if they break down in a live lane, the main concern about smart motorway safety.
Labour’s shadow transport secretary, Jim McMahon, has criticised Mr Shapps for not providing an update on the smart motorway action plan, and attacked the use of a song by the Pet Shop Boys in the advert.
He said: ‘It reduces it down to an insult, insinuating that drivers who became stranded were somehow careless. They were not. They were the victims of an ill-conceived scheme, which is still leaving people at risk today.’
https://www.highwaysmagazine.co.uk/High ... aign-/8916
Top

Beggars belief eh ?!! Can I have a snort or toke of whatever ‘Highways England’ are on ...
Top

It seems 'Smart Motorways' have been renamed 'All Lane Running' ALR motorways and are now safer than having a hard shoulder....you know it makes sense.

"Highways England said that their latest report’s five-year data shows ALR motorways, which don’t have hard shoulders, to be one of the safest types of road in the country. Drivers on a conventional motorway were shown to be 33 per cent more likely to be involved in a fatal accident than drivers on an ALR motorway..."
https://www.theengineer.co.uk/all-lane- ... celerated/
Top

"For four years, Mr Challis, 41, operated cameras and road signs at a CCTV centre in South Mimms, Hertfordshire, near a stretch of smart motorway on the M25. He said CCTV coverage of the roads was ‘abysmal’, either because of ‘broken cameras due to no picture, no movement or condensation of the lens’. ‘It was known for us to tilt cameras up towards the sun in hot weather to try to dry them out,’ he added.
CCTV is deployed on smart motorways to help spot drivers who have broken down. Once stranded vehicles are spotted or detected through radar technology, control room operators trigger red X signs on overhead gantries and signs to close off lanes.
But Mr Challis said it could be weeks or months before faulty cameras were fixed, and claimed control room staff were told not to trigger red X signs simultaneously if there were breakdowns in lanes one and four.
This was because, they were told, the overhead signs would resemble genitals.
His statement, seen by the Mail but not made public, said: ‘There was also the case of not being allowed to use certain signals to close particular lanes as the signals would look like a penis and so the settings prevented us from making certain closures. We all at first thought it was some overdue April Fools’ joke.’
Speaking to the Mail, Mr Challis added: ‘Somebody in their wisdom, higher up in Highways England, had suggested it looked like a penis, because the two red Xs looked like balls. We were told, “you can test it but don’t implement it”.
‘When you tried to set it, it said “invalid”.’ 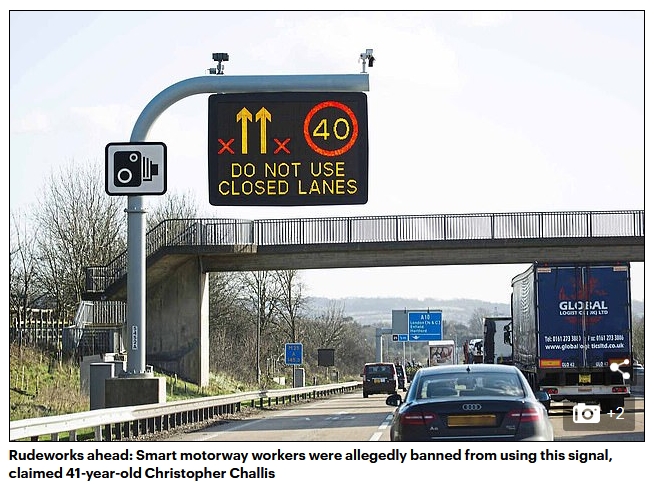 He said several staff raised concerns because it meant if two vehicles had broken down in lanes one and four, they would not be able to alert drivers to both. Mr Challis also claims potentially life-saving radar technology designed to detect broken-down vehicles within seconds was installed but was not always operational.
He says this may have led to one potentially avoidable fatality involving a stationary car and lorry in 2018.
He also said SOS telephones placed in emergency refuges, which drivers can pull into and are spaced up to 1.5 miles apart, were often broken.
His testimony will pile pressure on ministers to speed up safety improvements on so-called ‘all lane running’ smart motorways, where the hard shoulder has been permanently converted into an extra lane.
MPs on the transport select committee launched their inquiry into smart motorways in February. They are due to report back this year."
https://www.thisismoney.co.uk/news/arti ... itals.html
Top
Post Reply
27 posts