General Chat with an emphasis on BMC Minis & Other iconic cars of the 1960's. Includes information on MK1 Action days.
Post Reply
10 posts • Page 1 of 1

Back in early 1987 after seeing reports in the Motoring press and media that Graham Day (the then new Rover Group Chairman), was determined to keep selling the Mini and advertise that it was still in current production (unknown to many since the launch of the Metro in 1980) and despite several years of neglect of the Mini and its marketing by Austin-Rover....I was therefore inspired to write a letter to him outlining how easy it would be technically for Austin-Rover engineers to revive the 1275cc Mini Cooper by using the MG Metro engine and gearbox, just like many of us were doing as enthusiasts at that time. I was quite surprised to get this reply below, recently rediscovered after many years in a box of my old papers...... 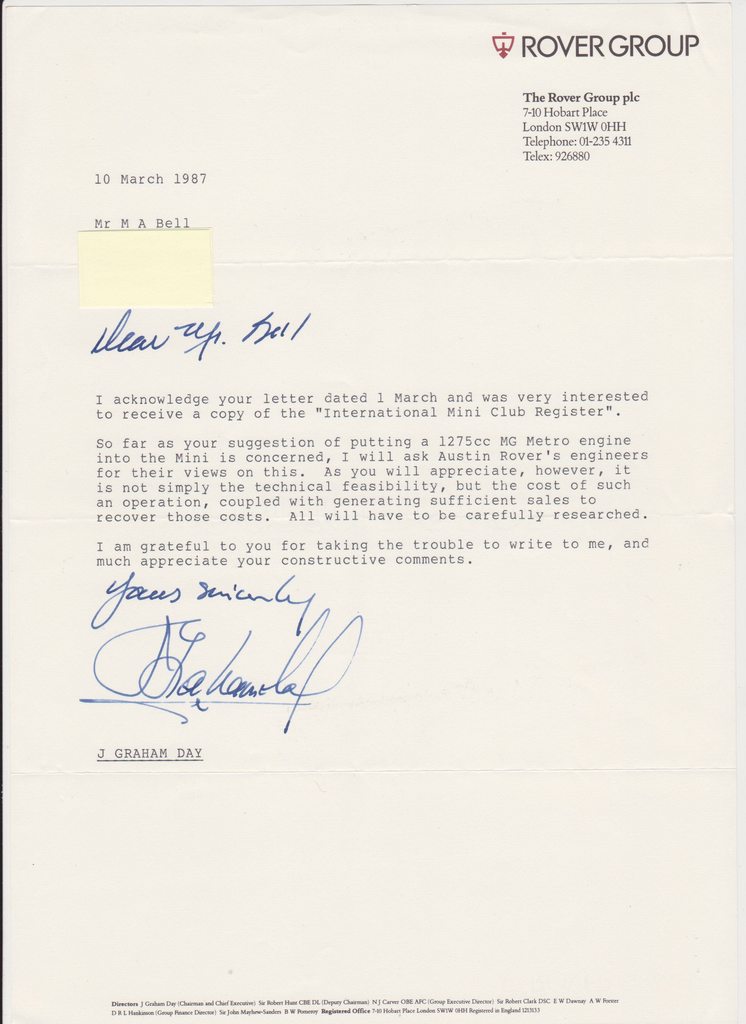 Amazing....., you wouldn't have believed it unless you'd seen it.
Top

As Peter says - you wouldn’t believe it!
Top

That's cracking, guess he may have been true to his letter too, though he left Rover in '91 just pre injection Mini era.

I think they lost it when the Metro came out, should have had a lower diff and an over-driven 5th gear.

Perfect for a Mini

Instead they became economy and noise obsessed to such a degree that they couldn't pull the skin off a rice pudding with ridiculous 2.76 diffs...wrong car / engine and totally wrong objectives.
Top

Great letter/response...amazing your letter to him even made it's way to his desk.
Top

What a cracking letter!

should you wish, you can contact me on rich@minispares.com