Want to sell something? Here's the place to list it for free! (DIRECT SALES / SWAPS) No ebay links please.
Forum rules
For Sale Section Rules

PLEASE NOTE! Postings in this section are deleted automatically after they have not been looked at for 30 days.

1) This section is for advertising items that you have for sale. Not for the discussion of listed items. If you wish to debate the pro's & Con's of any item listed, please start a new topic in the appropriate section.

3) If you have a number of items to sell, post them in a single ad marked "Multiple Parts" or similar. DO NOT post many individual advertisements as this forces everyone else's listings down the page.

4) It is expected that any items advertised on the forum are described fairly & honestly. It is the duty of the seller to ensure that this is the case.

5) Items listed for sale should WHEREVER POSSIBLE* be offered with a purchase price, not asking for bids from members. If you wish to auction your item to the highest bidder I would suggest you use ebay & pay the associated fees.

6) This section is offered as a free service to enthusiasts. Any deals made are between the buyer & seller only. The MK1 forum takes no part in any transaction & the appearance of any item in this section is not a recommendation. I strongly suggest that both buyers & sellers are happy to proceed with a deal before any money or goods change hands.

7) It expected that people posting items for sale are "Active Members of this community". Any Adverts placed by members with a post count lower than 5 will be deleted.

8) The advertising of or soliciting for VIN tags, log books or any other vehicle identification documentation without it's associated vehicle is expressly forbidden. Any member breaking this rule will have his membership terminated with immediate effect.

9) If a moderator considers any postings in this section to violate either the spirit or word of these simple requests the MK1 Forum reserves the right to delete any posts without prior warning or explanation.

10) The posting of items for sale on the MK1 forum constitutes explicit acceptance of these simple rules.

11) Members posting items for sale MUST include a rough location in their profile.

It would be much appreciated if sellers could leave the sale price on adverts after the item has been sold. This acts as a good measure of current value for other sellers.

* In some cases it may not be possible for the seller to list items with a sale price. In this case, listings will be reviewed on a case by case basis by a moderator. The moderators decision will be final.

Innocenti mini T full width rear bumper NOS stilling having the stud protectors installed. $1700
You do not have the required permissions to view the files attached to this post.
Top

I wonder if the Innocenti T rear bumper is similar to the rare early Mini Pickup full width bumper, but looks like the number of fixing studs is different?

Rear Bumpers
Two different types of rear bumper were factory fitted to the Mini pick-up throughout its production. The first, fitted from inception, January 1961, to 1969, was the one-piece full width bumper.

The second type, was the twin quarter bumpers that were already standard fitment on Mini vans and estates. These were fitted when pick-ups were re-branded as Mini Pick-up's in October 1969 until production ended in 1983, most likely to reduce manufacturing costs.

As the number of surviving pre-1970 cars declines full width bumpers have become extremely rare and fetch a hefty price when they are occasionally offered for sale. Fitment of the two types is not universal. The full width bumper has 7 fixing studs attached across it's length while the twin quarter bumpers have 2 studs at each end. Accordingly the flange at the rear, underneath the tailgate, has a different number of mounting holes according to which bumper the car was originally fitted with. On cars fitted with the full width bumper the flange is also lower down to allow the tailgate to be opened without restriction. 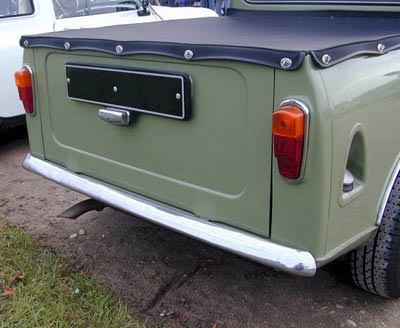 I would consider it interchangeable with the pickup bumper as the stud locations line up with my pickup bumpers. Just a slightly different shape. Also all Vans pickups and estates used the same rear valance panels so there should be no difference in the shape of the rear.
You do not have the required permissions to view the files attached to this post.
Top
Post Reply
4 posts • Page 1 of 1

Return to “For Sale”