I can't believe I haven't found out this any earlier as it was under my nose for many years, but I think I have now found out where the 1967 Le Mans Mini Marcos is.
The car is claimed to be in Zimbabwe but there has been doubt about its authenticity for many years.
I believe this is the proof to debunk it:
http://maximummini.blogspot.com/2020/06 ... rtons.html
http://www.maximummini.blogspot.com
- the definitive Mini is a derivative -
Top

Kees
DOWNTON Mini is what I like a lot.
Mini 1000 Super de Luxe Mk3 1974 for Downtoning it.
Collecting 60th wooden steeringwheels.
Top

That’s good new Jeroen! It’s the opposite with Unipowers, we’ve pretty much put to bed the idea that either of the two Le Mans Unipower GTs survived, contrary to what we’d been told for so many years.

Thanks Pete.
Meanwhile, the chaps in Africa have been woken up and they've come up with some very interesting info and pictures, which makes things even more complicated now! That only makes it more difficult now as there are two cars which both have their pros and cons or so it seems to me.
Not such a muddled mess as with the Unipowers though!
http://www.maximummini.blogspot.com
- the definitive Mini is a derivative -
Top

I don't think the Japanese car is the Le Mans car. The windscreen is not high enough and the orientation of the fuel cap is wrong.

I know the perspective is not the same but if you draw a line up the quarter light and on towards the screen corner it show the difference in the screen positions. Also the a-pillar appears to be wider on the Le Mans car. Also the rondel lights are bigger on the Japanese car.


Mini Marcos 1967 details 6.png
You do not have the required permissions to view the files attached to this post.
Has any body seen a dog dyed dark green?
Top

I know the perspective is not the same but if you draw a line up the quarter light and on towards the screen corner it show the difference in the screen positions. Also the a-pillar appears to be wider on the Le Mans car. Also the rondel lights are bigger on the Japanese car.


That's very good Surf. The plot thickens more and more with more stuff coming over from Zimbabwe.
Apart from there, I have a few things on my list to check next: the ACO, the owner of the car in Japan and the supposed owners of the FLIRT-car. There's more to follow.
http://www.maximummini.blogspot.com
- the definitive Mini is a derivative -
Top

I agree with Andrew - the window frames look slightly thicker and the small front quarter light look to be in a slightly different position.

The door roundal lights on the Japan car looks to be in line with the door handle, which looks slightly off set on the Le Mans and Africa car?

The other point I forgot to mention are the rolled sills on the Le Mans car. Both the cars claiming to be the actual one do not have the rolled sills. These may have been an add on, like the rear arch spats,, but why have they been lost.

Also neither has the correct rear lights. The Le Mans shots show three units of the same size on each side, the Japanese car has two large and one small, and the African car has one large and two small.

Is it possible that two cars were used at Le Mans

This shot is of the car during the Le Mans test 9th April 1967 when Tim Lalonde drove, hence the number 51, the car wore the No.50 in the race as seen in the other pictures. Also this looks to be prior to the roof being modified. 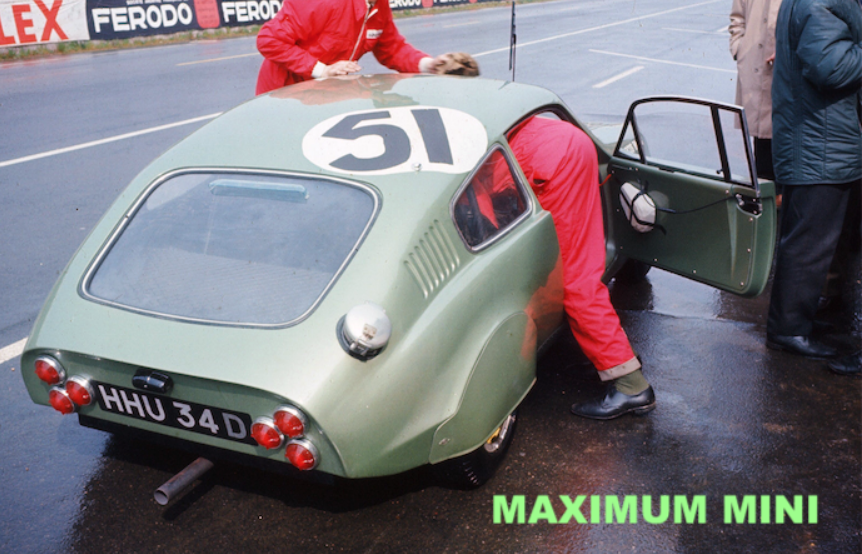 In favour of the Japanese car there appears to be a slight shadow above the B-pillar, in-line with the modded roof on the race car. You can also see that the roof mods were rivetted, and possible these were removed and the roof returned to a stock position. 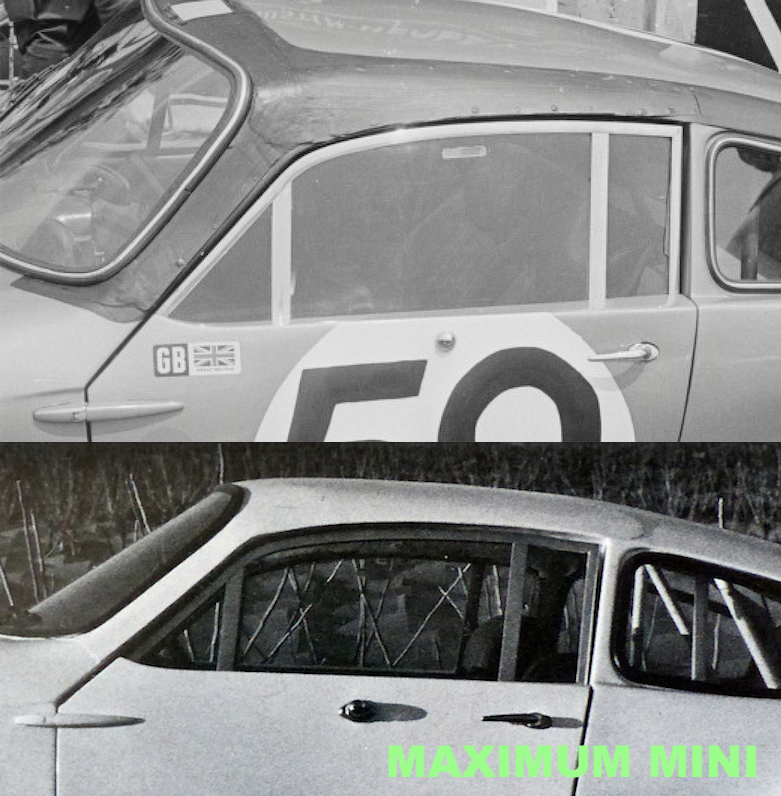 Has any body seen a dog dyed dark green?
Top