A Kind of Classic Car Vandalism?

A Kind of Classic Car Vandalism?

Interesting article below by Andrew Everett on BMW's 'Perfect' restoration with no patina of an ex-Elvis Presley BMW 507, seen in the March 2020 issue of Classics Monthly magazine:- 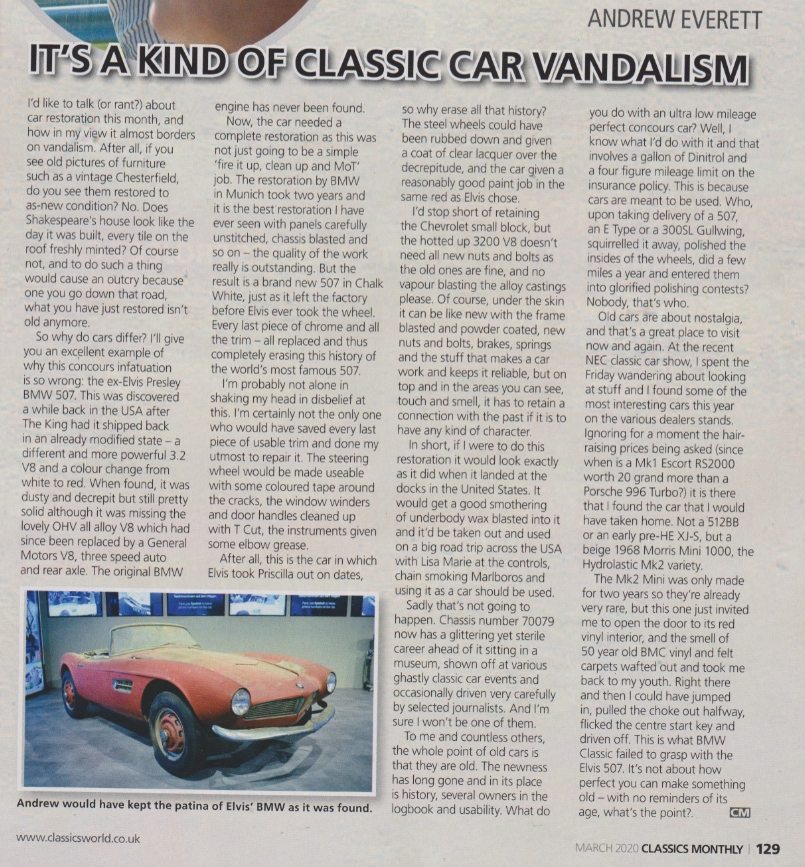 I must admit I do prefer seeing a bit of history in cars rather than full concours, though I understand that sometimes it’s the only way to save something, if I had cars that good I think I would also be too scared to use them, I’m just doing another car that I’ve owned for 22+ years (non Mini) and I’ve just cleaned up all the interior as best as I can, the body is solid and will have plenty of protection underneath, the mechanical bits are being gone through, once this is done it will be used once again and I can’t wait to have it back on the road

Our 1071 went way beyond that but two of our SDLs carry as much patina as I can save... meaning one hasn't been on the road since the early 90s... we use it as a reference car mainly.
Top

Yup, it's an age old debate, with no 'right' answer.

A car is only new once, and when you take ownership, at what stage in its past do you restore it to? If 'new', you must eradicate its actual history. With race cars, you pick an event, but in turn it effectively becomes a replica or recreation of it's own past unless you have all the right bits.

I remember years ago driving '62 EMU', the Aston DB3S team car (DB3S/6) and it was quite simply the most gloriously preserved thing you can imagine. If ever a car needed a preservation order, it was this one. But between owners a 'specialist' decided that the black leather seat coverings were 'wrong' and retrimmed the seats in the apparently 'correct' material.

When it came back to the showroom I could have wept. The leather might have been fitted after the car was new, but a LONG time ago, and it was quite likely the same stuff Moss, The Whitehead Brothers, Collins etc sat on...... new material was not an improvement in that weathered cockpit. THAT was a wrong decision, but the owner thought it the right one. Who is right? Well both or neither. but he owned it so could argue he was. The previous owner shared my view, and I could see the pain on his face when he saw it, poor old Hugh.

It's probably aged in well enough now as to be less of an issue, but that was just one small element of an otherwise perfectly imperfect car. Full resto on Elvis's 507 is just the same, but squared. Are you restoring it as A 507, or HIS 507 - that's where the decision lies.

I'd have shot it like he did his De Tomasso! and dripped peanut butter on the seats

I know its not original I like it this way

My 1960 is currently undergoing a full resto as it’s rotten to a point where it all needs doing. I loved the used flat faded paintwork but now it’ll be shiny, new and matching. Sadly a lot of the character has gone.

At the Goodwood Revival there was an unrestored cherry red ‘59 which under the bonnet appeared in an identical condition as mine. Grubby and faded etc., which reinforced the idea that mine was still in original condition, sadly I’ve decided to clean mine up now as it’s no longer in keeping with the rest of the restored bodywork and would look out of place. But that’s the last original bodywork gone forever so it’s not without regret to a degree.

At least I still have all the original interior bar the carpets so the smell will remain.
110JTO - 1960 Morris Cherry Red
HTC782N - 1974 Bronze Yellow
Top

Unless you hide it away for sunny days only, it won’t stay too shiny for long..
Cheers

mab01uk wrote:Interesting article below by Andrew Everett on BMW's 'Perfect' restoration with no patina of an ex-Elvis Presley BMW 507, seen in the March 2020 issue of Classics Monthly magazine:-

Much the same thing happened to the Steve McQueen Cooper S

That had the strip down and blasting treatment which revealed little if any corrosion.
You do wonder why would anyone restoring such a famous car have replaced this floor?
McQueen 67 S (10).jpg
You do not have the required permissions to view the files attached to this post.
The power of accurate observation is commonly called cynicism by those who have not got it.
Top

If that was done in the US then the answer is clear - American car restorers will ruin anything for a price. Watch some of these US chop shop custom car programmes on TV and wince as a lovely straight 1968 Coupe DeVille is butchered into some horrific nightmare. The workmanship is often superb but you just want to ask - what the f*** are you doing??

One of my favourite cars was the DB4 GT 40MT, ex Peter Sellers. It was owned by a glamorous Lady in the 80's and 90's and she used it well, still retaining the blue paint job (resprayed in the sixties) and some gloriously tatty yellow/white reflective alloy number plates. She and a young boy were in the 1990 Norwich Union Classic rally - I was in a green/white Cooper S where I, the blue Aston and Chris Spennywyn in CRX89B had a superb carve up along a road I forget en route to Donington.

Now of course, 40MT has been restored and basically ruined. Green, no bumpers, 100 point concours blah blah blah blah.......
You do not have the required permissions to view the files attached to this post.
Top
Post Reply
12 posts