What did you do to your first Mini

General Chat with an emphasis on BMC Minis & Other iconic cars of the 1960's. Includes information on MK1 Action days.
Post Reply
46 posts

I kept it for 50 years .. ok so it was not always on the road and it is like "ALL" the other UK based Minis of its time & age it is a Triggers Broom.. however it got a very nice comment from Mr Parnell when we were at the last Spring AutoJumble .. I appreciated his comments because it is a lovely car.
Last trip out was to the Revival & the advert for sale will come out in the next MCR Magazine.
Reason for sale i just do not use this 997 Cooper.
Top

Mid-70s, a purchase whilst still at University from a colleague at my summer vacation job. A Hooper modified 1071 S now owned (and restored beautifully) by Brian Harding. Full write up in the July 2018 edition of Mini World.

I started my driving on Volkswagens and did not get my first Mini until 1985, A brand new Mini Ritz from Dutton Forshaw in Tonbridge. It had a new fangled C reg plate. I fitted a Rookie dash, a clock in the dash, a stereo cassette and pod speakers on the rear shelf. I drove it for 8 months and 12,000 miles and then traded it for a crusty 1972 MGB Roadster. Only other notable thing that happened to was a rear wheel bearing failed on a trip to Crystal Palace, luckily Austin Rovers came with 12 months AA Relay cover back then so the car went straight back to Dutton Forshaws' and a new bearing was fitted under warranty.
My next was a £120 Wolseley Hornet that was brought to teach a girl friend to drive. Once she passed her test it was disposed of and replaced by a VW Beetle. I didn't buy a Mini for another 20 years. In the last 13 years I have 9 more.
Has any body seen a dog dyed dark green?
Top

Pandora wrote:UHS 571G, and absolute horror of a Mk3 elf.

Faded red (a Ford colour if I recall, applied I think on a windy day from half empty spray cans...... not by me) with a white roof. The front panel, in a charming piece of the coachbuilder's craft was a standard mini one, with the gaping holes filled in with a sheet of 3mm plywood, painted in the same way are the rest of the sorry mess. Still, the white weller 8 spokes matched the roof and the plastic 'mini special' arches covered them. It had a the original Blue leather seats under awful covers.

I bought it from an ad in the back of Miniworld (I remember it was quite an early issue and had a girl in a '60s dress and beehive on a white cooper on the cover) and it came from behind what would later be my office when I joined the HSE, in Belford Mews in Edinburgh. The seller was a very 'military chap' - cords, mustache, clipped vowels the whole lot. Being young, daft and totally ignorant of cars he probably couldn't believe his luck that this daftie bought it!

Anyway, it was a total shitter. A rot box. I drove it for the best part of a year to Uni as Major whats-is-name had obviously got a hooky MOT on it to sell it. When it came close to MOT time my dad asked his brother who was a mechanic to have a look at it 'to check it's actually safe'

I can remember Uncle Drew telling me 'Every single one of it's floors is rusted out, and I can't work out how many it has'!

He did offer to rebuild it into a much nicer Mk3 Hornet shell they happened to have round the back at work, but that got vandalised and he kind of lost interest.

Tot sure what I did to it exactly - changed the wheels back to standard, ripped off the arches. not much really

I sold it to a guy in Portobello who was going to restore it, but assume he never did.

The grille is still on my garage wall though.

I think I've found it Al - December '92 issue of Miniworld with three of the magazine staff dolled up like Christine Keeler and Mandie Rice-Pudding leaning on a white / black Rover Cooper, the only ad in the back for an Elf must be yours, no photo just type : ''1968 Riley Elf MkIII 998cc, 10 months MOT, walnut dash, lady owner can no longer manage upkeep, needs caring home, £700 ono. Telephone 031 (Edinburgh dialling code etc...)''.

Must have been the Major's trouble strife's car then...?
Nidge

AndyPen wrote:
My wife's first mini was our 64 SDL, which I have a pic of here somewhere having a head upgrade to a blue 202.

Later it was sold, then bought back with an 1100 lump but we managed to find the original engine too.


Top shot taken last week, bottom late 70s - both wife and car still in good working order (she is the blonde and the red one is the mini)

The first thing I did was change the steering wheel for a smaller Astrali wheel.

Later, the wheels were changed for a set of Rostyles and later again a set of Mambas.

It went on fire one night, there was some problem with the wiring loom for the front lights shorting out.
Luckily, the damage was just to the loom, so myself and my Dad replaced with one from a scrapyard.

After that, two younger brothers learned to drive in it.

It still lives on in the family, but hasn't had much use in recent years.
Top

Wow, you guys are so young ! My first was a speedwell blue 1961 850, 4223 WA. It gave me the steepest learning curve of my life. The gearbox started to jump out of second so together with a mate and a Haynes, we pulled the E&B on my drive and set about stripping engine from box. I bought new baulk rings and forks from Kennings, our main agent. I think they cost more than a week's wages. I was a struggling University technician at the time. My commute was 10 miles each way and I was obliged to use the bus for a week. A few weeks after I got it back on the road, the rear subframe collapsed. Before I had the dosh for a new one, I was told about a dumped mini close to where I worked. The car in question had no engine, interior or glass but had a very useable subframe. So armed with a few tools I set of with a mate to liberate it. Speed was of the essence as we were in a non too salubrious area and in our haste to remove it we sawed through both rear shock absorber lower mountings. In other words, the stub axles. This made the later swap a bit more involved.
More later.
Top 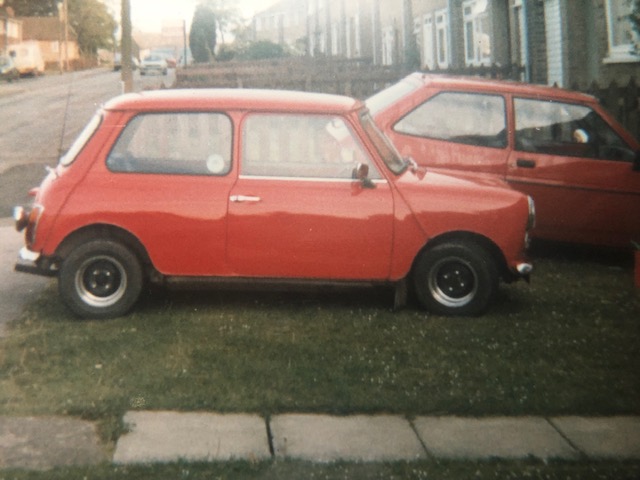 WMU 211G wrote:
I think I've found it Al - December '92 issue of Miniworld with three of the magazine staff dolled up like Christine Keeler and Mandie Rice-Pudding leaning on a white / black Rover Cooper, the only ad in the back for an Elf must be yours, no photo just type : ''1968 Riley Elf MkIII 998cc, 10 months MOT, walnut dash, lady owner can no longer manage upkeep, needs caring home, £700 ono. Telephone 031 (Edinburgh dialling code etc...)''.

Must have been the Major's trouble strife's car then...?

That was the line, yes. 'The wife's little runabout'

This was my first....after owning for about a year. Smacked into a tree. 1977 MkIV CA spec
You do not have the required permissions to view the files attached to this post.
Top
Post Reply
46 posts