What did you do to your first Mini

General Chat with an emphasis on BMC Minis & Other iconic cars of the 1960's. Includes information on MK1 Action days.
Post Reply
46 posts

Some will have seen these before.... 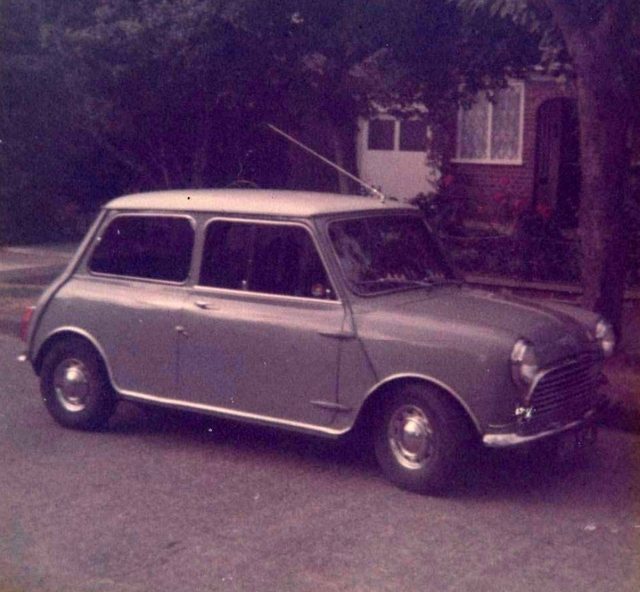 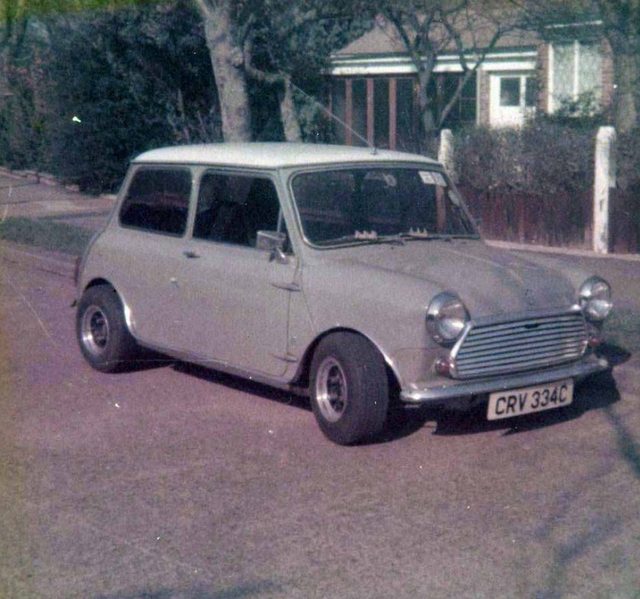 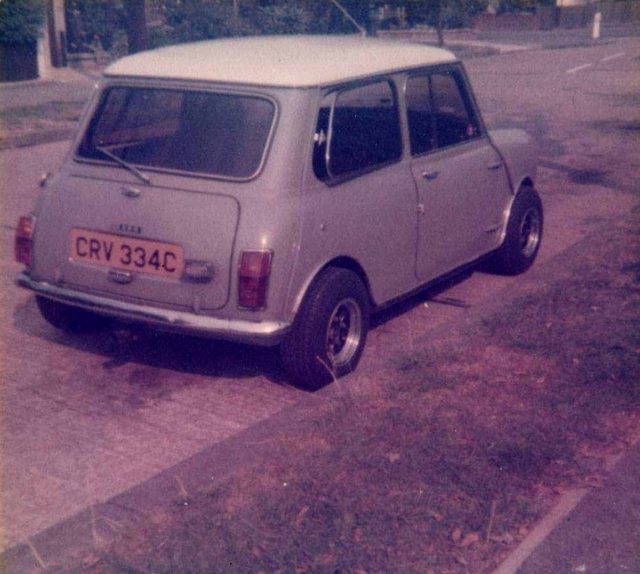 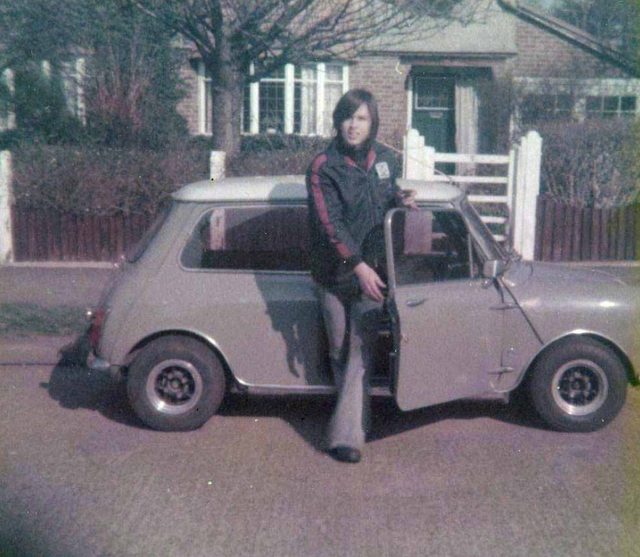 A couple of years later this was my second Mini a '67 Mk 1 below, upgraded this one to a 998cc eng/4 syncro gearbox from a Mk3 write off (bought from Miniparts of Nantwich who broke up newish Mk3 write offs) and with many other Mk2/3 bits transferred over from my previous '65 Mini which by now jumped out of gear, had rusty sills, rusty rear subframe and failing Hydrolastic plus some accident damage to the front end. My brothers and I sprayed the '67 black in my dad's single garage to match the black 'Shadowlite' laminated glass I picked up secondhand locally from an ad in the back of Motoring News, also W&P nudge bars, Vanden Plas Headlamp rims and a Webasto sunroof from a Triumph Herald. Scrapyards were full of Heralds with these sunroofs so we used to remove them, recover with new vinyl and refurbish as required and them fit them to many different cars for friends and family (if they were brave enough to have the the hole cut!). 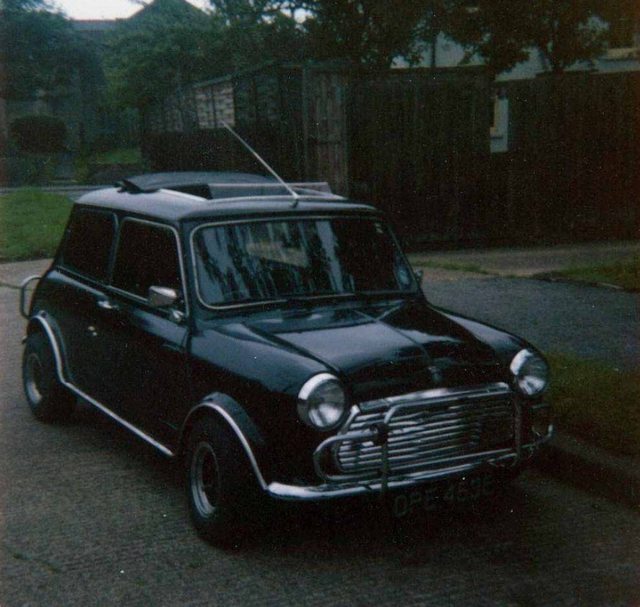 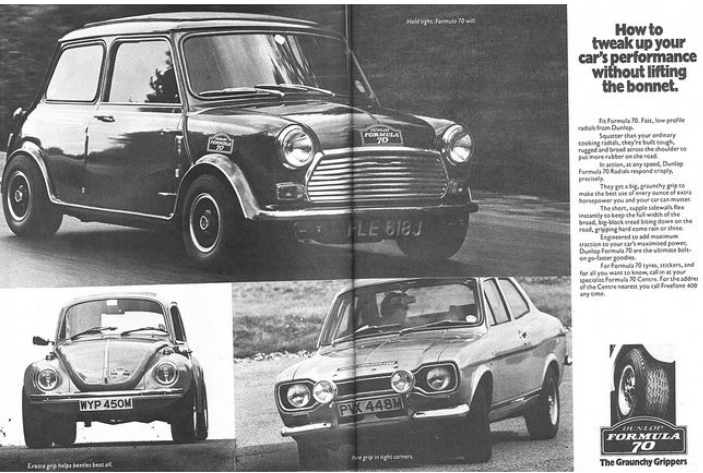 I wanted it to look like the Mini in the 'Dunlop Formula 70' tyre ad. above!
The 'Shadowlite' glass looked good in a Mini back then but you really needed to have the sliding windows open at night to be safe......and a few years later the law on dark tinted glass in cars was tightened for safety reasons.
Last edited by mab01uk on Wed Jan 22, 2020 12:46 am, edited 8 times in total.
Top

Again no pictures but my first mini and my first car was an Antique Gold / brown trim 1976 Austin 850 PJL 835R bought from my dads mate in the motor trade for £750 in 1984. After a good T Cut and polish it came up really well! After a few months of learning to drive in it I took my test and passed first time. Then it was treated to a set of GB alloys and 165 Goodyear’s, twin Hella spots and a Paddy Hopkirk leather wheel. For a shit colour it looked very cool!

I can probably find some pics of my first Mini and will post up when I do.

It was UEX 69L, a 1972 Harvest Gold 1000. Apparently it is still taxed and on the road but has changed colour a couple of times (Red then blue or vice versa) and I suspect is nothing but a tax exempt special now. No idea where it resides.

Pretty standard car, apart from reverse rims and a Peco twin upswept silencer. Also had some 'nice' furry stripes seat covers. Sharp radio cassette and speakers on the rear shelf. Driving lights that the dynamo couldn't cope with and kept burning out indicator switches because I didnt use a relay ... The joys of being a naive 17 year old

Sold it for a Mk1 Fiesta, but not before I had bought my Mk2 Cooper, TVB 56F, meaning I've never been without a Mini in all my driving life

Faded red (a Ford colour if I recall, applied I think on a windy day from half empty spray cans...... not by me) with a white roof. The front panel, in a charming piece of the coachbuilder's craft was a standard mini one, with the gaping holes filled in with a sheet of 3mm plywood, painted in the same way are the rest of the sorry mess. Still, the white weller 8 spokes matched the roof and the plastic 'mini special' arches covered them. It had a the original Blue leather seats under awful covers.

I bought it from an ad in the back of Miniworld (I remember it was quite an early issue and had a girl in a '60s dress and beehive on a white cooper on the cover) and it came from behind what would later be my office when I joined the HSE, in Belford Mews in Edinburgh. The seller was a very 'military chap' - cords, mustache, clipped vowels the whole lot. Being young, daft and totally ignorant of cars he probably couldn't believe his luck that this daftie bought it!

Anyway, it was a total shitter. A rot box. I drove it for the best part of a year to Uni as Major whats-is-name had obviously got a hooky MOT on it to sell it. When it came close to MOT time my dad asked his brother who was a mechanic to have a look at it 'to check it's actually safe'

I can remember Uncle Drew telling me 'Every single one of it's floors is rusted out, and I can't work out how many it has'!

He did offer to rebuild it into a much nicer Mk3 Hornet shell they happened to have round the back at work, but that got vandalised and he kind of lost interest.

Tot sure what I did to it exactly - changed the wheels back to standard, ripped off the arches. not much really

I sold it to a guy in Portobello who was going to restore it, but assume he never did.

The grille is still on my garage wall though.

Al
You do not have the required permissions to view the files attached to this post.
Top

1960, Morris 850, 485CYO I bought it age 16 from a local motorsports family, used for 12 cars and autotests. I filled up the hole and repaired the rust holes and gave it a matt respray, heated stick on rear window, Peco single box, reversing light, matt black painted interior, India GT radial tyres, 1100 side light-indicators and a full Clive Trickey tune up.
20160727224449_07nncropsized.jpg
20160727224449_08sized.jpg
st mini resized.jpg
You do not have the required permissions to view the files attached to this post.
Top

My first mini was my first car! A 1983 mini city with glass sunroof, in a drunken spirited drive I ended stuck 5 foot in a tree

, the next week my dad got me racing formula fords to get it out of my system as he put it! I reshelled the car

, went to the UK a bought all the shiny crap I could buy from mini spares (the type of stuff you would laugh at today) I bought he full interior from a 90’s cooper that had 500 miles on it from new, it was written off in a multi story car park

I spent the summer rebuilding it when still in college. We had fantastic times in that car and are still spoken about today when out for drinks with old friends. Special times! The good news is I still have it today!
Top

My first Mini was a 1962 SDL purchased as a damaged repairable in 1965 was Almond Green/White roof chrome door window
surrounds ect, if I remember correctly it took me nearly 14 months to get it on the road. Reg no FSS 696
It had by that time had a colour change to Rootes Lincoln Green/Black roof as living just north of Glasgow owning a Green/White
car was a NoNo 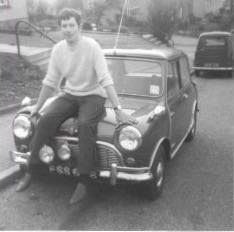 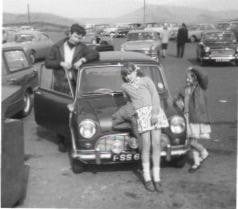 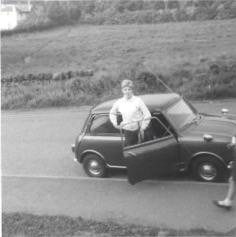 As it was when it went on the road, other the said colour change one of the first mods a leather rimmed Motolita, Karobes rally
seat covers, a walnut bur dash from a ZB MG Magnet yes the curvature of the dash matched the Mini windscreen!! standard speedo
head and the other gauges + a few from the SDL were fitted. I tried all sorts of homemade gear-levers to get rid of the horrible
pudding stirrer gear change.Over th next 6yrs it grew MK2 rear lights ADO16 front S/indicator lamps Ciebe iode concave style
headlamps, MG 1100 engine and remote change (at last a proper gear lever), home made R/H tank 4 1/2 reverse rims with
145 Michelin zx tyres stretched on to them, did about 200,000 miles with it including many trips to Holland and Germany.
Sold it to fund the building of a MK1 Mexico BIG mistake that thing!!
Replaced the Escort with DOT 445K a Black 1275 GT bought from a customer, with slight front end damage for £100 less front
seats and wheels. It had a 1293cc engine LCB manifold went well in those days, purchased a set of Mambas with 165 x10
rally specials from a guy in Edinburgh one of the mews garages if I remember. 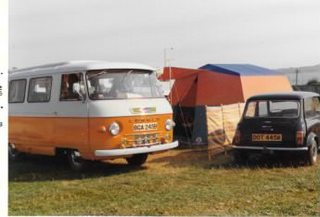 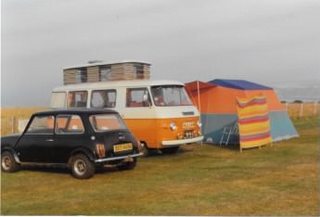 Camping in Portknokie 1974 sold when family came along bought a 1500 Maxi there ended my Mini ownership for 40 years.
I did have a hand and interest in this in the early 70s 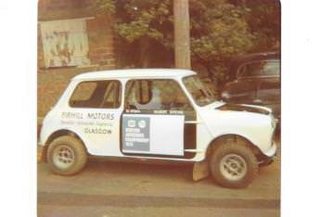 First mini was a half share in a rally prepared orange and black 65 Genuine Cooper S that was a little more work than we thought... and neither of us could insure it at 17 anyway!

My wife's first mini was our 64 SDL, which I have a pic of here somewhere having a head upgrade to a blue 202.

Later it was sold, then bought back with an 1100 lump but we managed to find the original engine too.

In between time, a 70s copper brown 970S 'Gold Seal' circuit racer was purchased, and now that motor is now in the 64 SDL... and is sitting in our garage as evidence that bodged minis fitted with oversills and dodgy plates welded in can keep on going

Hoo dear, I was hoping this topic was not going to come up as it is going to be embarrassing

-aged 18 in 1988 I bought a 1976 mini pickup, £50 spares or repair from a farmer ( my first mig welder followed a few weeks later). Well repaired, sun roof (always leaked) , furry dash, fibreglass front end, de seamed, etc. Went around Europe and Scandinavia several times.
And best of all I still have it in the garage awaiting yet another rebuild, less the furry dash I hasten to add

Can’t find my photos of it but my first car was a ‘77 Russet Brown 1275GT, Webasto roof, bought it at the age of 20 in 1985, bought a set of slot mags for it, Special aches, and got it bored out to 1380 by my local engine shop. I hit my next door neighbour driving his Marina in the snow resulting in a new front end, his car was Russet Brown as well so we shared the paint!