General Chat with an emphasis on BMC Minis & Other iconic cars of the 1960's. Includes information on MK1 Action days.
Post Reply
110 posts

Paul does do a lovely job & I am sure there will be good demand for his sprints. But remember you can still get a Sprint from the guy who invented them.

Nice photo of one of Rob Walker later Sprints. Maybe the precursor to the S&A sprints.
You do not have the required permissions to view the files attached to this post.
Top

Some of his own cars

mab01uk wrote:Full page ad below for the 'Wiginton Sprint' in the latest October 2018 issue of Miniworld magazine.
https://www.paulwigintonclassicvehicles ... conversion 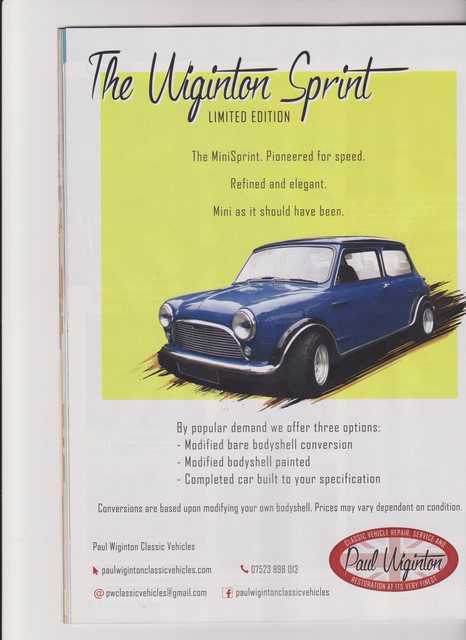 A couple of years ago I had a nose round Paul's sprint at the L2B, to say his work is exceptional would be an understatement, I think it would almost be possible to go metal finish perhaps a merest skim of filler, even the internal welds were perfectly ground down, the man is a perfectionist

Let's not forget Pete Henry's creation - one of, if not the, nicest Mini of any type I've ever seen, the attention to detail was simply stunning - a fully sectioned shell but seams left in place completely by design, a nice touch

I watched, in awe, the build
You do not have the required permissions to view the files attached to this post.
Top

maybe he's got a dog.
Top

When the Mini was introduced most people thought a family saloon car could not be made any smaller if it was to seat four people in reasonable comfort, but someone always has to prove public opinion wrong and the first to do so, we believe, was Neville Trickett. His idea of lowering the car has been put into production by Stewart & Ardern Ltd., the Morris distributors, who skilfully cut the body in two places to reduce overall height by 4 1/4 in.

In fact the demonstration car is 5 in. lower than standard since the Hydrolastic suspension has been dropped, and it drew as much attention in the street as some exotic American cars we have been testing recently – not presumably because it is so startling, rather because it is obviously a Mini … but different. There is a definite trend toward "personalised" popular cars and this one might well catch on in limited quantity despite a large price label which reflects the amount of surgery done on the bodywork.

The basic Mini-Sprint conversion, which costs £335 onto the price of a Cooper or Cooper S, involves cutting the body above and below the waist-line, taking out a depth of 1 1/2 in. at each level and increasing the rake of front and rear windows. The Mini-Sprint GT conversion costing £400 takes an extra 1 1/4 in. from above the waist, making a total of 4 1/4 in., removes all the welded seams which stand proud of the normal bodywork, replacing them by butt or lapped joints which present a neater and smoother appearance. Perspex is fitted in all side and rear windows (the back side-windows no longer hinge outwards) and of course the doors, wings, and boot-lid have all been cut to size. Included in the specification are an acrylic paint finish, in any colour, rectangular Cibie headlights, a small diameter leather-trimmed steering wheel and column rake adjustment.

This is obviously a very sizeable operation and the workmanship is extremely good; it is not possible to see where the cutting has been done. However, despite special optional front seats and rear seat trim, we did not feel that the general appointments of this car lived up to a £1,000-plus price tag and would prefer to spend some of the money on Radford treatment such as nice, well-fitting carpets, soundproofing, electrically-operated windows, an instrument console and so on to make the car feel more luxurious.

Wind noise has been slightly reduced by the elimination of seams, but the 1275S engine in the demonstration car was such a rough, noisy unit – as they all are – that it feels an exciting experience anyway to reach 100 m.p.h. which we estimated to be the maximum speed, an extra three or four miles an hour deriving from smaller frontal area and slightly reduced weight.

Lowered suspension adds to the overall effect but while improving the high-speed handling, it was not ideal for roadwork as the Mini-Sprint was really harsh on bumpy roads and the front wheels sometimes hit the wheel arches. The wheels, incidentally, were magnesium alloy with 4 1/2J rims costing £70 for a set of five.

Individuality costs money and with a car like this it is hard to assess a reasonable price. Considering the work involved the cost is undoubtedly justified, especially since the bare bodyshells can be bought for £230 or £260 depending on the conversion and built up from there, and while we can think of better ways of spending up to £1,250 this is very much a matter of taste. – M. L. C.
https://www.motorsportmagazine.com/arch ... -sprint-gt 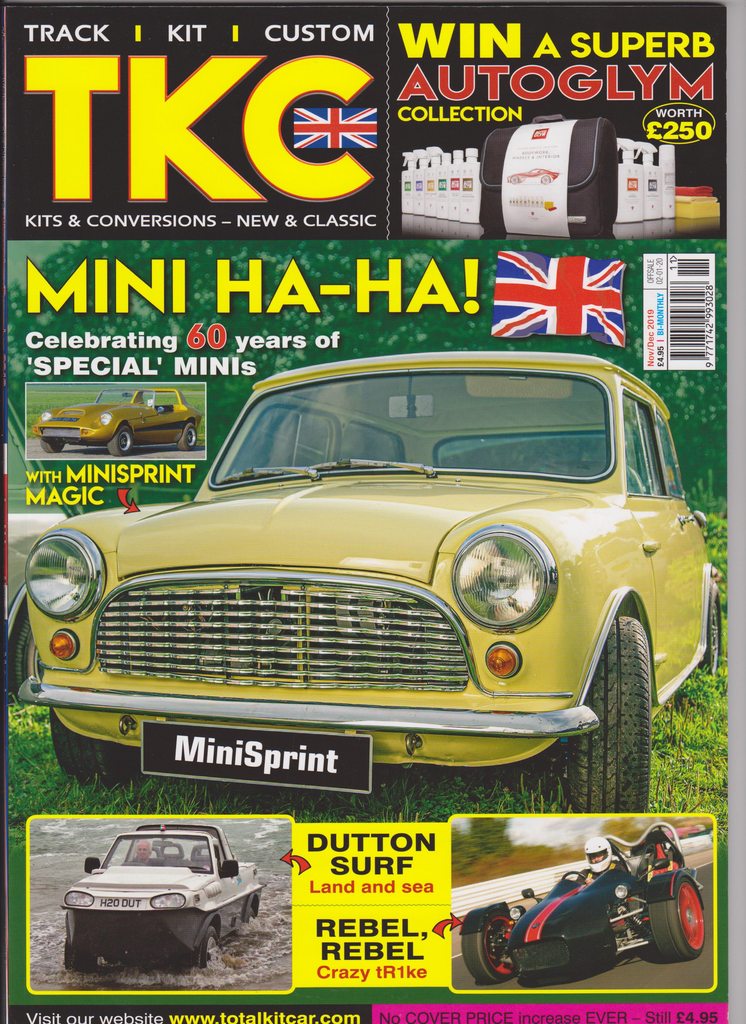