The story of the Schilovski Gyrocar....

A section dedicated to non Mini related conversations that some members may find disturbing, worrying or offensive. If you are likely to be troubled by non Classic car related content, I would suggest you avoid!
Post Reply
2 posts • Page 1 of 1

The story of the Schilovski Gyrocar....

Research has disclosed a good deal of information on this amazing machine.
"In 1912 the Russian Count Peter P Schilovski, a lawyer and member of the Russian royal family, visited the Wolseley Tool and Motorcar Company, and laid before their engineers plans for a two-wheeled gyroscopically-stabilised car. At that time Wolseley were a sizable manufacturer producing ordinary cars, double-decker buses, taxicabs, lorries and even powerboat engines.
The Wolseley men were clearly impressed, as the job was accepted, and work began immediately, under the supervision of A W Dring, the Chief Experimental Engineer. The chassis took a year to build, which seems impressively fast given the amount of experimentation that must have been needed. The Count was a frequent visitor during this period to the Adderley Park works in Birmingham.
The Gyrocar was powered by a modified Wolseley C5 engine of 16 - 20 hp, with a bore of 90mm and a stroke of 121mm. It was mounted ahead of the radiator, driving the rear wheel through a conventional clutch and gear box. A transmission brake was fitted after the gearbox- there appear to have been no brakes on the wheels themselves. The small size of the engine in the photograph (in an era when specific outputs were low) indicates that the Gyrocar was distinctly underpowered. The weight of the vehicle was 2.75 tons, concentrated on two wheels.
The gyroscope was of 40 inch diameter and 4.5 inch thick at the rim, and spun at between 2000 and 3000 rpm, powered by a 110V 1.25 hp electric motor. This was beneath the gyro on the same spindle for direct drive. The motor was powered from an engine-driven dynamo mounted beside the clutch. The gyro rotor weighed 12 cwt and apparently absorbed 10% of the engine power. A centrifugal governor rang an alarm bell if gyro rpm fell too low, and support sprag wheels on either side were automatically lowered to prevent the car falling over. A rather fragile-looking system of toothed quadrants actuated by two 95 lb pendulums maintained stabilisation.
On April 28, 1914, the first public demonstration took place before a large and interested crowd in Regent's Park, in central London. According to a contemporary newspaper report, it could crawl along with people jumping on and off, and still maintain its stability.
At the outbreak of the First World War in 1914, The Count returned to Russia. Wolseley were fully occupied in war work, and the Gyrocar was not uppermost in their minds; it lay abandoned in a corner of the factory. The Wolseley directors not unaturally assumed that the Count had been a casualty of either the war or the Russian Revolution. Wanting to get it out of the way, but not wishing to dispose of it completely, they hit upon the extraordinary solution of burying it. This is not normally considered an appropriate method for the long-term storage of motor vehicles.
In 1938 it was decided to exhume the Gyrocar. It looks as though it was interred upside down...."
The Full Story of its exumation and sad end 10 years later in 1948 here:-
http://www.douglas-self.com/MUSEUM/TRAN ... hilovs.htm 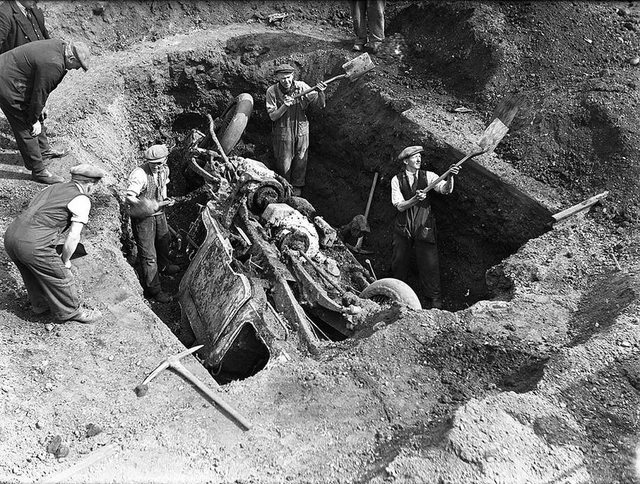 That time Wolseley buried a Russian count's two-wheeled gyro car because it ran out of storage space...
https://www.hemmings.com/stories/2019/0 ... rage-space
Top

Re: The story of the Schilovski Gyrocar....