How carnage on the roads in the 1960s led to progress

A section dedicated to non Mini related conversations that some members may find disturbing, worrying or offensive. If you are likely to be troubled by non Classic car related content, I would suggest you avoid!
Post Reply
1 post • Page 1 of 1

How carnage on the roads in the 1960s led to progress

How carnage on the roads in the 1960s led to progress.
"The Sixties were a perfect motoring storm: new motorways, no speed limits, no seatbelts, no central barriers, no restrictions on drivers’ hours and no restrictions on alcohol. Then there were faster cars which were still primitively constructed, increasingly heavy lorries, a new breed of travelling salesmen and no roadside medical help whatsoever.
The heaviest peacetime death toll on Britain’s roads was in 1966, when 7,985 were killed – a third of whom died on their journey from the scene to hospital. At the start of the decade, the emergency services sent to an accident had no rescue equipment and no medical training. The North Riding fire brigade, which covered one of the country’s largest counties, didn’t want this to change – it argued that as many of the victims were non-Yorkshire people who were just passing through, it shouldn’t spend local money on assisting them.
In Catterick Village, a GP, Dr Kenneth Easton who had the 1959 A1 bypass running behind his house, became increasingly exasperated at arriving at the scene of crash and finding no protocol, and no equipment, for treating a casualty. He started the Accident After Care Scheme, which brought GPs, the fire brigade and the ambulance service together. Ambulances at that time were controlled by the fire service and driven by people with no medical knowledge."
https://www.thenorthernecho.co.uk/histo ... -progress/

Horrifically surprising find of historic crash pictures when there was carnage on Britain's roads.
"THE photo-archive at The Northern Echo never ceases to yield surprising finds – in this case, horrifically surprising. In fact, viewed from our world of airbags and from a dashboard where a modern car bleeps at its driver to warn them if they stray a few inches over the central line of a road, they are genuinely shocking.
Four of these pictures – the most brutal four – are 15 inch by 12 inch prints mounted on good quality card for display in an exhibition, which seems to have been put together in the mid to late 1960s to soberly inform drivers of what can happen when things go wrong. To ensure they got the message, the pictures are given titles like "Death Crash" and "Death on the Road".
he pictures are all from the mid to late 1960s when there really was carnage on Britain's roads. The largest number of people killed was in 1941, when the blackouts drove the figure over the 9,000 mark, with another 50,000 being seriously injured.
When the streetlights came back on, the fatality rate fell to about 5,000 a year, but, with a growing number of cars doing increasing speeds, it gradually grew, peaking in 1966 at 7,985 – the highest peacetime number, about the time our pictures were taken.
The breath test was introduced in January 1966, with the roadside breathalyser coming into use in 1967, which must have helped reduce the numbers of deaths along with better technology in both vehicle and road manufacture.
Today, our roads are historically very safe – although 1,793 deaths is still a decent lower league football crowd and the 25,000 seriously injured would fill a moderate sized stadium. While our cars are more clever and more safety conscious, these pictures are a reminder of the forces at play on our roads."
https://www.thenorthernecho.co.uk/histo ... ins-roads/ 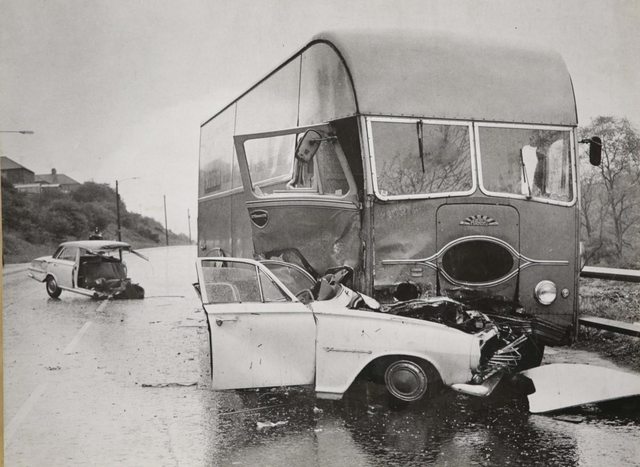 IN HALF: A Vauxhall Victor has come off very badly in this collision with an Albion van
Top
Post Reply
1 post • Page 1 of 1