Any of you ride motorcycles?

A section dedicated to non Mini related conversations that some members may find disturbing, worrying or offensive. If you are likely to be troubled by non Classic car related content, I would suggest you avoid!
Post Reply
14 posts

Any of you ride motorcycles?

Currently im riding (or wanting to get out on) my 2017 owned from new Gsx-s 750, great bike and a 2015 Triumph tiger 1215 adventure bike which i am colour coding some of the silver parts to match the frame, will try and post some pictures up in the next few days.

What are other people riding?

Would also love something more classic but you cant beat the reliability of the modern jap stuff!
Top

I’ve been riding since I was 9.....43 years. Trials, Enduro...but mostly trail riding for the last 25 years. I currently ride a 23 years old Honda CRM 250 which I consider to be the best trail bike of all time. Strata Florida in Wales is a regular route and will ring a bell with people here as it was one of the destruction testing routes for the Works Minis.
I also have a 64 Lambretta TV 200 and a 69 GP 250

This wont really count, but:
Also have a Lambretta, but only a 50cc one

well, the full name of it is Lambretta Luna Sport.
Bought it mostly because it says 'Innocenti' in the speedo and there's a matcing (i) on the front shield.
Then there's a bunch more, like a dosen more 50cc ones of various brands.
Like Kreidler Husqvarna Zündapp Gilera.
But dont think this will count as 'riding a bike' but there is something very stressreducing about driving that slow once one's getting used to it.
And some feeling of freedom not having a 'shell' around you.
Oh well, will shut up with this 50cc nonsence now.

No, actullay there is one more thing: nowhere near the amount of rust as any car!
Top

mk1007bike-512x384.jpg
This was my last bike, it took me 2 years to build, apart from the obvious changes, I cut the frame in half and altered the seat/shock position, took the engine from 883cc out to 1400, big cams, big valves etc. On the dyno it made 111 bhp and 96 ftlb of torque, not ground breaking for a motorcycle engine but for a Harley pretty impressive. I sold it for a stupid amount ( low) for no reason but space and regretted it ever since. I've tried to find it to buy it back but it's been on SORN once the MOT ran out. So am I bike rider, yes , just haven't got a bike at the moment, but the triumph Bobber is very tempting, or if I can find one a series 1 LD150 lambretta would fit the bill like I had as a kid about a 1000 years ago

MS
You do not have the required permissions to view the files attached to this post.
Top

Yes, when weather and Covid restrictions are more favourable.
I've been riding motorcycles for 57 years.
Lost count of how many different bikes I've ridden in that time.
Currently its a 2008 Harley Davidson Fat Boy (6 speed 1584 cc V twin for those of you who might not know)
Roll on summer!
Mk1 998 Cooper
Top

(I’m not that old! It’s was my grandads)
Cheers

I don’t ride much but during the first lockdown I decided to get a bit of English Wheel practice in and turned an old Suzuki GN125 into a Flat Tracker style custom. 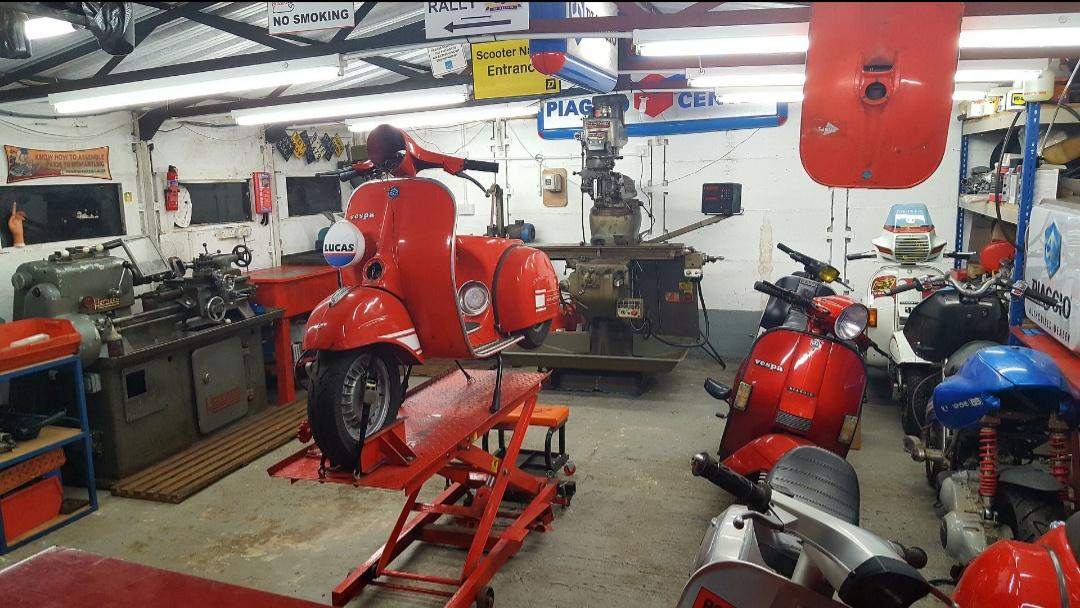 I dare call my Vespas motorcycles, as I ride them faster than many of the bikers ride their "iron horses"
My pride: '59 Vespa GS 225 Corsa
GS.jpg
My daily ride 20HP Vespa ET3 during a photo shoot at a scooter rally in Trieste (IT):
et3.jpg
And my Race Bitch: 27 rear wheel HP - have retired from racing now, but had lots of fun though over a few years in European endurance racing.
Race.jpg
All of them "shed-built"

And hope you do not mind that weird bloke in the photos, thought the title is "any of you ride motorcycles" - hence the riding photos.
You do not have the required permissions to view the files attached to this post.
If only I knew the power of the Dark Side...I wouldn't have made contact with an Innocenti