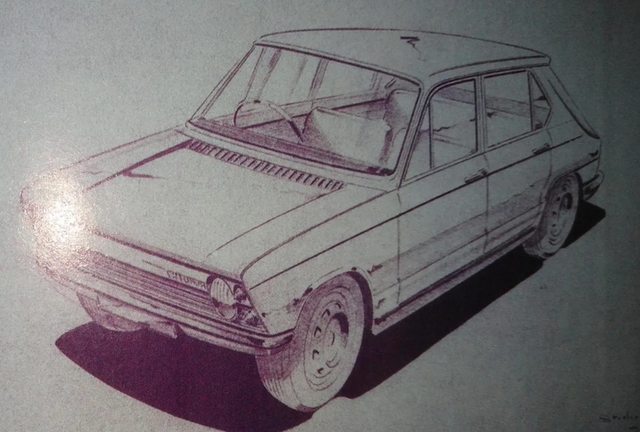 A Golf-class Triumph before the Golf?
"Back in the mid-1960s, Triumph’s own Harry Webster had asked Michelotti to sketch out an idea of what a five-door, shortened Triumph 1300 would look like, and the above image is what we have of it. Based in the clever engine and running gear of the front-wheel drive Triumph 1300, the ‘Short 1300’ as it was known by Webster looked like it could have had some promise.
Harry Webster recalled in the 1998 issue of Classic Cars: ‘Ah, yes the short 1300. We set the wheelbase big enough to accommodate four adults, and drew a line just in front of the front wheel and just behind the rear wheel and said to Michelotti, “design a car around that – forget the luggage space”.’ Webster went on. ‘A prototype was actually built of one of Michelotti’s designs, but never reached production.
So could it be that Triumph and Michelotti could have beaten Autobianchi and Dante Giacosa in building the world’s first supermini ahead of the A112 in the late 1960s? Based on the Triumph 1300’s running gear, but with a range of engines that also included the smaller 948cc and 1147cc from the Herald, this could have really hit a sweet spot in the market place as Mini buyers were looking for something to grow into for their next cars.
Being a Triumph, it might have been sold at a price premium against what BMC might have charged for such a car, but with that all important hatchback and smart Italian styling, it might have been considered worth the premium. Another, more interesting consideration is this: had Leyland Motors found the development funds for Triumph to bring this car to market, would it have left the company with another reason to rebuff the government’s pressure to merge with BMC?"
More from AROnline:-
https://www.aronline.co.uk/opinion/triumph-supermini/
Top