Peugeot 104 – the true Mini replacement? (AROnline)
"It’s easy to imagine that the Peugeot 104 was pretty much the car an Issigonis-led BMC might have built in the 1970s. Built as a small car to slot in the range below the underrated front-wheel drive 204 saloon, the new 104 was a bold new direction from France’s most conservative car manufacturer.
It was brilliantly packaged and engineered. It was the first recipient of the X-Series of aluminium ‘Douvrin’ engines built by Française de Mécanique, and expanded over the years to become the default engine choice of Renault and PSA Group of companies. In the 104, it was initially available in 954cc form, and was clearly inspired by BMC’s front-wheel drive solution by having its transmission mounted in the sump, but evolving the concept by canting back the engine by 72 degrees.
Like the BMC A-Series powered Mini and 1100/1300, this engine layout resulted in excellent packaging – and although the 104 ended up being 50cm longer than the original ADO15, it benefited from additional interior room that was easily on a par with the ADO16, and the boot wasn’t too far off the British car either. Given the 104 was 20cm shorter than the BMC 1100/1300, that was quite an achievement.
At launch in 1972, the 104 was a four-door saloon only but in 1976 the 104 received a hatchback rear, thus expanding its appeal considerably. In addition, a shorter three-door hatchback was added to the range (and called a Coupe), and larger engines were added to the range, lengthening its legs and making it faster. Now, the 104 really proved its potential – and although it never challenged the Renault 5 in sales terms in its home country, it proved to be a solid seller for Peugeot.
So, why think that Issigonis would have approved of the 104, and would BMC have ended up building a car like this in the 1970s. A quick look at the BMC 9X looks like compelling evidence. Maybe the 104 would have been a bit shorter under Alec (not necessarily a good thing), but it does rather feel like a modernisation of the ADO16 concept (transmission-in-sump transmission, great packaging efficiency and Pininfarina styling), scaled down to supermini proportions.
Another reason to mourn the non-appearance of the BMC 9X. How different history may have been if it had happened."
The full AROnline article:-
https://www.aronline.co.uk/opinion/peugeot-104/ 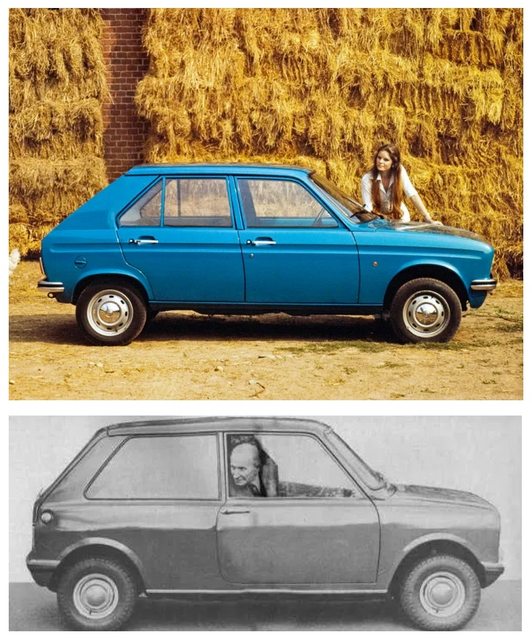 I used to have a thing about Talbot Sambas, which evolved from this.
Dessie McCartney's son had an ex works one, giant killing thing.
Top

My 'everyday' is a Citroen LNA which is related to the 104 and evolved into the Samba, it has a 652cc aircooled twin from the 2cv. It maybe for sale for the right price if anyone is interested (including masses of spares including a newly rebuilt spare engine)

You do not have the required permissions to view the files attached to this post.
Top
Post Reply
4 posts • Page 1 of 1