It was just like old times, to be testing an MG again, even if Abingdon fanatics may protest that it was not pur sang. But the Metro Turbo is lively, jerky, hard-sprung and noisy, which is surely in the best traditions of MG sports cars? (I will qualify some of that, later.)

When I heard that we were to have a turbocharged MG Metro for test I was immediately reminded that back in 1931 another motor journal road-tester, namely HS Linfield of The Autocar, undertook a rather interesting journey in a supercharged MG. He had put a colleague in hospital in Edinburgh after an accident with a Talbot 90 team-car (PL4) when returning from an MCC trial and felt it incumbent on him to visit the patient. For the first visit Linfield used an Ulster Austin 7. The next weekend he made the same long haul, London-Edinburgh Infirmary-Esher in an experimental 850 cc MG Midget equipped with a supercharger, which, incidentally, involved mixing lubricant for this component with the petrol before this was put into the fuel tank. Linfield cruised the 1931 blown MG at 50 mph. most of the time (and less fast than that for the first nine miles after starting out, to warm the oil) although this Midget was good for the same 50 mph. in second gear.

Some measure of progress, allowing for the greater capacity of the Metro’s engine, is that the 1931 MG took six seconds to get from 20 to 40 mph. in middle gear, and that “hard” plugs were carried. The Metro Turbo disposes of the identical pick-up in a matter of 3.9 seconds in second gear, and I have no idea what sparking-plugs it was using.

Of course an MG Metro Turbo would be faster than that ancient experimental MG, cruising contentedly as it will at an indicated 70 mph. at 4,000 rpm. Indeed, it takes 2.7 seconds less to go from rest to 60 mph. through the gears than the late, lamented MG-B. Before describing its other virtues, let me qualify my opening remarks about it. This MG Metro Turbo is unquestionably lively, although the driver is not immediately aware of this, because there is no sudden acceleration following turbo-lag, no “boy racer” implications, just a smooth flow of impressive power from around 3,000 rpm that takes the little package from to 70 mph. in 13 seconds. If the throttle is snapped open at low speeds, though, quite pronounced transmission-snatch is apparent. The Hydragas springing becomes lively over bad roads but normally the ride is well cushioned and comfortable. There is some exhaust-boom from 70 mph. onwards and a crisp exhaust note at a 1,000 rpm idle, but the Metro Turbo cannot be criticised as noisy over most the speed-range for such a high-performance (110 mph.) 1,275 cc car, especially at steady throttle openings.

The MG Metro Turbo is also a sure-footed car, fast over winding roads, fun to drive, but tiring on long hauls. The handling is as expected from a front-driver, the grip of the low-profile Dunlop Sport SP D2 165/60HR13 tyres good, but they aquaplane in puddles. Light alloy wheels are used, of neat appearance. The gear shift is generally acceptable but a fifth speed would be nice for fast cruising, and much of the running on twisting roads calls for third. Reverse engages easily, after lifting the lever to the position outboard of top. The disc/drum brakes must be satisfactory, because I never gave them a thought, but the driving-seat is high and a trifle cramped, being supportive. The engine asked for quite slot of manual choke, from a cold start.

I do not altogether like the appearance of the chunky Metro with its short drop bonnet and perched-up driver, but there is no denying the quality of the interior appointments or the convenience of the controls and switchgear. The row of switches below the left side of the fascia are easily reached and clearly symbolled, for rear-window-heater, hazard-warning, rear wipe-wash, rear fog-lamp, with a spare, although it was too easy to flick onto wipe and wash when wipe only would suffice, just as with the two stalk-controls you could get a fast wiper setting when only needing normal speed. But full marks for the layout and finish. The fuel-gauge is steady but slow reading. The tank must not be filled beyond the bottom of the fuel-filler neck, as recommended in the Metro handbook; the filler cap has a flap low down on the off-side body panel but neither is lockable. The tank holds a miserable 6.6 gallons and as fuel thirst was 27.8 mpg. in quite ordinary driving, improving to an overall 29.2 mp, the range is inadequate.

I have already referred to the smooth acceleration right up the rev range. This is achieved by British Leyland’s ingenious and creditable adaption of a solenoid-controlled oscillating bleed-valve in the feed to the diaphragm that affects the position of the turbocharger wastegate, the Lucas electronic unit thus being able to relate the opening and shutting of the wastegate to engine speed. This restricts boost from the small Garrett AiResearch T3 turbocharger to 7.7 psi. at 6,300 r.p.m. and permits the normal 9.4 to 1 compression-ratio to be retained for the A-series iron long-stroke (70.6 x 80.3 mm.) three-bearing engine, which is of course mounted transversely. This is safe to 7,000 rpm or 250 rpm above the limit indicated on the tachometer, and it is smooth withal. Boost is shown by a Veglia fluorescent bar-gauge within the tachometer, the indications of which flick up without disconcerting the driver. The neatly-installed turbocharger has upped power output to 93 (DIN) bhp. at 6,130 rpm, notably higher than that of the Cooper-Mini, allied to the excellent torque figure of 85 psi. at only 2,650 rpm. Top gear has been raised from 3.44 to 1 to 3.21 to 1. All without much apparent noise increase apart from a very faint trill of the chattering wastegate and with so much retention of docility that you can be unaware that this MG is turbocharged. It has to be said, however, that the oft-used yardstick, 0-60 mph. acceleration, takes the same 9.4 seconds as it does in a slightly heavier Ford Fiesta XR2 with 323 cc more engine capacity, but atmospheric induction.

The MG Metro Turbo is a great little fun-carriage. The test-car was finished in red-lined two-tone with seat-belts appropriately in red, matching the carpets, I could have done without the big “Turbo” motifs on the sides of the body, preferring to be anonymous, but I liked the general concept of this MG. The price is £5,649. WB.
https://www.motorsportmagazine.com/arch ... etro-turbo 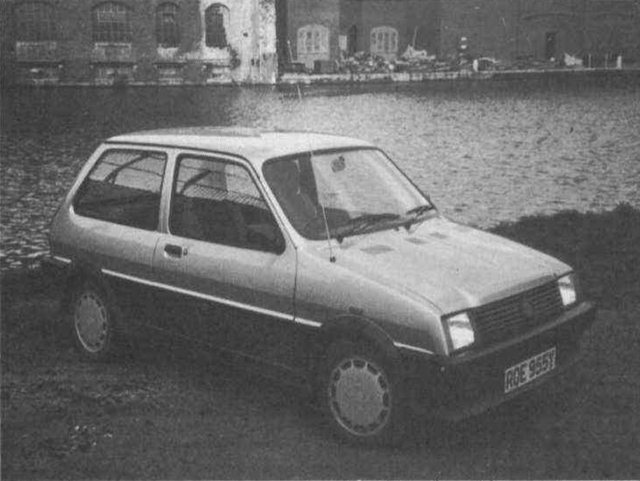