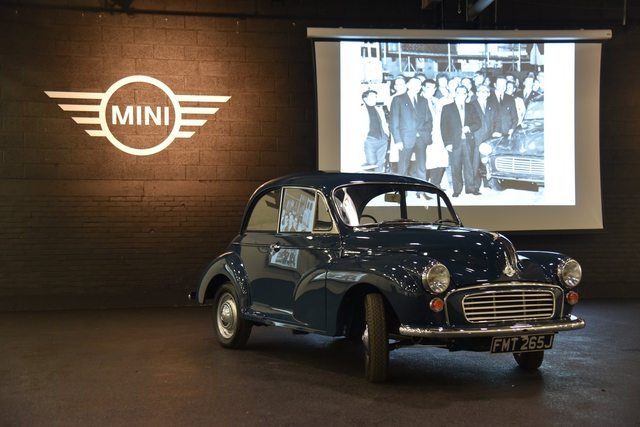 Last Morris Minor Built returns to Cowley after 50 years
12th November 2020!
A historically significant Morris Minor has returned to the place where it rolled off the production line on the 12th November 1970.
50 years after it was built, the last Morris Minor saloon to be produced has been relocated into the building where it was made at MINI Plant Oxford in Cowley, Oxfordshire and now forms part of the factory’s collection of historic vehicles.
The gleaming car is a credit to the professionals, specialists and volunteers from the Morris Minor Owners club who have worked tirelessly over the past four years to restore the car to its former glory. Today, the fully restored vehicle looks just as good as it did when it was first built.
Club Secretary, Ray Newell who accompanied the car on its return to ‘T Building’ (which houses MINI Plant Oxford’s car collection) at a specially arranged socially distanced handover prior to the current lockdown said: “The car is a credit to those who have supported the club in getting it back on the road in time for this significant anniversary.
“We are grateful to staff at MINI Plant Oxford for their assistance in getting the car to into the factory’s museum and for housing and looking after it for the foreseeable future. We hope that post lock down that people will be able to come to view the vehicle and appreciate what is a wonderful example of this iconic, British car.’
Steve Wrelton, spokesman for MINI Plant Oxford, said: ‘The backstory and subsequent restoration of this car to its former glory is nothing short of staggering. Like the Mini that came after it, the Morris Minor was one of the most popular and recognisable cars in Britain. To have the last one built returning to its spiritual home and joining our car collection here at Plant Oxford is just fantastic.”
https://en-gb.facebook.com/groups/cowleyworks/
Top

i remember seeing a 1972 K reg Minor in Maroon/Dark Red. That must have been hanging around in a showroom for a while for the reg plate then. This was in Cardiff/Newport area.

A little off the topic I know but I also remember one of the last Beetles made being kept in a showroom as an investment. That was Cyril Rodgers of Newport. Can't remember the year but would have been around 1978 - 1981. Could have been a 1302S.
Top

"into the building where it was first made" is a bit of a stretch I think but it is a nice story.
I wonder how much of the original has survived? It was in shocking condition when on ebay a few years ago. I know somebody who saw it then and said he doubted the original shell could be saved.
Top

Comments from Ex-Cowley workers on the actual birthplace nearby of the Minor:-
"I remember the last of them being built in South Works (Q or T block, before it was redeveloped into QT for the Marina). The cars were pushed along the line by hand. I seem to remember that the foreman would blow a whistle every so often, and the men would push the cars to the next station."
"The car was not returned to its "birthplace" Pressed Steel" Cowley had nothing to do with the Minor. The Minor bodies were made in the Midlands and painted and assembled in the Cowley South Works, Nuffield's Morris plant on the other side of the Oxford Bypass. T building (which houses MINI Plant Oxford’s car collection) was Pressed Steel's tool room where Keller die sinkers and planers machined the auto body dies to press panels for many other manufacturers! (Alfa Romeo, Jaguar, Volvo, Rolls Royce, The Rootes group, MG, Austin etc)."

Some more details on the restoration below from the original FB link:-
"The transformation seemed impossible when the car was discovered in 2016 after languishing in the open for many years. The provenance of the vehicle was well established having previously been offered for sale in 1994.
Sadly, the new owner at that time was unable to enjoy the pleasure of ownership due to ill health. After his demise, the car was abandoned and it deteriorated badly in the intervening years. The car was acquired by the Morris Minor Owners Club in 2016. Initially a phased restoration was planned.
Substantial structural repairs were needed, and the services of a specialist welder and fabricator were enlisted. In 2018, thanks to a generous bequest from a former member, things gathered pace and with the help of members with specialist skills, original components including the engine and gearbox were rebuilt. The bulk of the refurbishment and the reassembly of the car was undertaken by volunteer club members in Derby where the MMOC has its headquarters.
Club Secretary, Ray Newell who accompanied the car on its return to ‘T Building’ (which houses MINI Plant Oxford’s car collection) at a specially arranged socially distanced handover prior to the current lockdown said: “The car is a credit to those who have supported the club in getting it back on the road in time for this significant anniversary."
Top

Was it the last one built , wasn’t one built later from spare parts ?
8662 FN Austin Mini

Various Minors were built later from spare parts and a new bodyshell but this car was the final production car with the final factory chassis number.
Top