Jeremy Clarkson’s review of the MINI GP3, his People’s Car Of The Year

Jeremy Clarkson’s review of the MINI GP3, his People’s Car Of The Year

Jeremy Clarkson’s Sunday Times review of the MINI GP3, his People’s Car Of The Year:

Three years ago, a possibly over-refreshed chap from BMW announced at a motor show in Germany that soon the company would make a MINI with more than 300 horsepower. Yeah, right, we all thought. And what else will it have? Space lasers? Anti-gravity thrusters? Beryllium posi-drive? Our scepticism, however, was misplaced, because earlier this year it launched the Mini John Cooper Works GP, and under the bonnet is broadly the same turbocharged engine as you find in a BMW M135i. An engine that produces 302 horsepower.

Now, obviously, if you are going to put the blood-red heart of a mutant wolf into the body of a mouse, you’re going to have to make all sorts of changes to ensure the whole thing doesn’t just explode in a shower of cogs and rubber and headlamps.

Which is exactly what BMW hasn’t done with the JCW GP. Glance casually at this ridiculous car and you’ll note the huge double-decker wing on the roof, the carbon-fibre-reinforced plastic barge boards along the flanks, the flappypaddle gears and how the rear seat has been replaced with a beam to make the body stiffer.

But look closely and you’ll realise it isn’t a strengthening beam. It’s just a bar to stop your luggage slamming into the front seats when you brake. You’ll also notice that the flappy paddles are connected to an automatic gearbox and that the barge boards don’t do anything at all.

Then there’s that big wing. After you’ve spent a while wondering why you’d want to push the back of a front-wheeldrive car into the road, you’ll do more examinations and start to wonder if, actually, the downforce comes solely from the weight of the damn thing.

Having raised and lowered your eyebrows a few times at the plainly cosmetic nature of all this flimflam, you’ll come to the conclusion that the standard Mini would be capable of handling the 302bhp monster that now lives under its bonnet.

It isn’t. Not by a long way. Many years ago some sensible engineers from Saab explained it would not be possible to put more than 200bhp through the front wheels, and then proved themselves to be correct by launching the wayward 220bhp Viggen.

This was the car industry’s all-consuming big problem back then. Many companies, Saab included, were making frontwheel- drive cars because they’re cheaper to manufacture than those with rear-wheel drive. But you simply cannot expect the front wheels to handle the steering as well as increasingly large amounts of power.

They experimented with all sorts of ideas, but there’s no getting round the fact that when you open the taps in a powerful front-wheel-drive car, the front wheels will squirm this way and that, causing what’s known as torque steer. Sometimes it’s annoying. Sometimes it’s alarming. And sometimes you’ve no idea what it is because you’ve speared head first into a tree and now you’re dead.

BMW got round the problem by sticking with rear-wheel drive in its powerful hatchbacks. Mercedes and Volkswagen resorted to four-wheel drive. But the engineers at Mini did not. Apparently the four-wheel-drive system used on the Countryman is designed for gymkhana car parks, not the Nürburgring, so they stuck with front-wheel drive — and crossed their fingers.

How best do I describe the results? Hmm. I think “Sweet mother of Jesus” covers it. You pull out to overtake a van, you put your foot down and then something with the power of Thor’s hammer takes control of the steering and you’re left with two choices: get off the power or have a crash.

Tidal torque steer is not the only issue either. This is a car that doesn’t glide down a country road, or squirt. On its lowered suspension, it bounces. Imagine being on Tigger after he’s just received news of a big premium bond win and you get the idea. But bear in mind you are also in Eeyore’s eddy with no control over your direction of travel.

This is a car that will usually arrive, but not necessarily at a place where you wanted to go.

Around town there are problems too. Things are very jerky in stop-start traffic. And on the motorway, mainly because of the tyres, it is very loud. Plus, you have to pay attention constantly because all Minis have a natural cruising speed measurable with Mach numbers. You have to be especially careful in the JCW GP because it has a top speed of 164mph. That’s 164mph. In a Mini.

So. It’s far too powerful, far too loud, more blinged up with unnecessary nonsense than Lewis Hamilton’s earlobes, annoying in traffic, a crazed dog on the motorway and less fun than a crashing airliner when you accelerate on a road with any sort of camber at all. It is also one of the best cars I’ve driven all year.

We are currently in what might fairly be termed the car industry’s beige period. Cars are made to be ecological and safe and spacious and cheap to repair. They creep onto the market with an apology rather than a fanfare. There’s no pizzazz or razzmatazz in almost any of them. And then, just when we thought it was all over, out of nowhere comes this crazy Mini.

It’s as if I’ve been sitting in a dentist’s waiting room for ten years and, all of sudden — blam — I’m at the carnival in Rio. There is colour all around me and noise, and instead of thumbing through a two-year-old copy of Country Life to the accompaniment of the tick and the tock of the dentist’s old clock, I’m listening to the sounds of the samba on a float as bright as a child’s imagination.

I learnt, after a while, to wait for the right bit of tarmac before mashing the throttle into the firewall, and then I’d laugh out loud, in a way I haven’t for years, at the noises and the rush that resulted. I then learnt to deal with the low-speed problems by not driving slowly. This is not a serious car. The steering is not particularly crisp, and the gearbox is not that snappy. It’s not designed to be a textbook lesson in how to tame physics. It’s designed to make your journey a bit happier. It’s not a book. It’ a comic.

It is fast, though. Really fast.

I also liked sitting in it. I love how, in a Mini, the windscreen is so far away and you sit so low down that you’re almost peering over the dash and the bonnet. Most of all, though, I liked the certain knowledge that, among all the millions of types of Mini we’ve seen over the ages, I wasn’t going to encounter one faster than mine.

And I’ve saved the best bit till last. When other firms launch a limited-run car such as this, they tend to go a bit berserk with the price tag. But this Mini is less than £35,500. That is extremely good value, principally because most of the time it’s much, much more fun than cars costing 10 times the price. 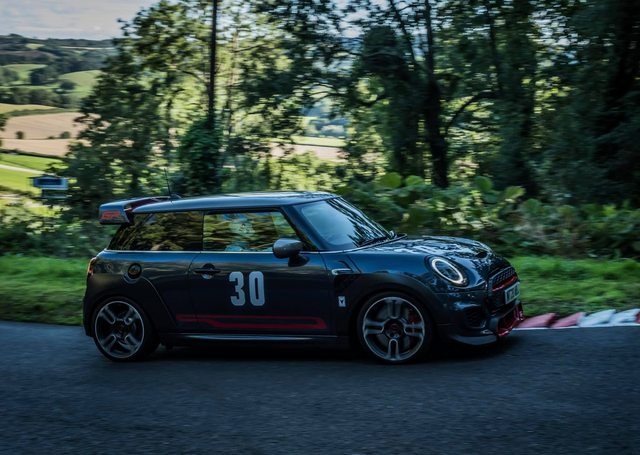