Happy 40th birthday, Austin Metro
"On 8 October 1980, and years of failed supermini projects and months and months of speculation and scoops, Sir Michael Edwardes whipped the covers finally off the Austin Mini Metro, and BL followers across the country breathed a deep sigh of relief, and it looked like it was going to be perfectly competitive against its toughest supermini rivals. If that sounds almost defeatist in the context of modern car launches, it isn’t meant to.
BL had not had a good news story since the launch of the the launch of the Rover 3500 (SD1) in June 1976, and four years is an absolute eternity when you’re on your uppers. Read Ken Clayton’s brilliant account of the launch of the Austin Metro in 1980 to get a real sense of the importance of this car – when the covers came off in front of selected members of the trade, there were tears. Genuinely, grown men (as the trade was back then) cried with the relief of having a car that they knew they would fly off the shelves."
And that it did…
https://www.aronline.co.uk/facts-and-fi ... tin-metro/

Metro at Forty
"After almost five years without announcing a brand new vehicle, the release of the Austin Metro was highly anticipated. Designed to be a replacement for the Mini, the Metro didn’t quite surpass its little brother during its run. Whilst many companies had already begun to investigate the super-mini market, British Leyland and the Metro entered late into the race. After a last minute redesign, the revised Metro made its grand entrance to the public in 1980.
Despite being the butt of many jokes over its lifetime, the ‘everyday’ looking Metro remains one of the top ten best selling cars in the UK. It remained popular with the British public throughout its production life, despite becoming a relatively old design by that time. Forty years on we now want to celebrate the little car that had such a big impact…"
https://metro.britishmotormuseum.co.uk/
Top 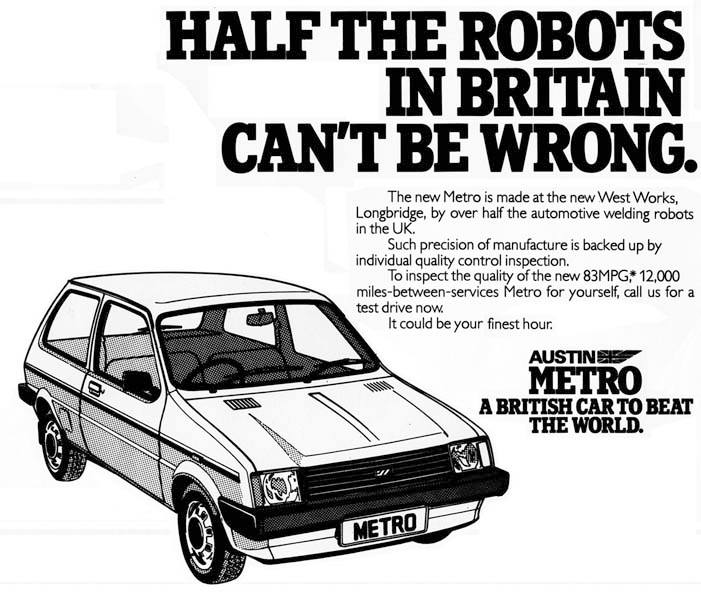