The Austin Metro turns 40 years old on 8 October and to celebrate, AROnline will be sharing your best memories of one of the most iconic cars of the 1980s. Here, in the first set of memories, you’ll find BSM cars, collectors and recollections of when they were brand new:-
https://www.aronline.co.uk/facts-and-fi ... -part-one/
Top

Modified Metros : Crayford Metro Politan:-
It seems that few – if any – of these Crayford convertibles actually reached customers before the company decided to concentrate on its Fiesta conversions. And it had a Dr Who connection back in 1982…
https://www.aronline.co.uk/the-converte ... ropolitan/
Top

Thanks for posting these links, takes me right back, can’t believe it’s 40 years since the launch.
My first Metro was a 1.3S in Vermilion red, the ‘performance’ model in the line up before the launch of the MG.
A great little car, I added ‘Carmona’ 12 inch Minilite replicas and lowered the suspension a bit, I thought it looked great!

Anyone else with early Metro memories?

The first and only Metro I owned (bought secondhand) was also a 1.3S in Vermilion red.

I remember visiting the local BL Dealer on the day of the Metro launch (originally named Mini Metro at the time) to see if there was anything new that could be useful for modifying or upgrading Minis. Many were disappointed to see what looked like the familiar rather ancient A-Series Mini engine and 4-speed gearbox under the bonnet, despite BL announcing they had spent around £30 million on developing the new A+ engine and gearbox. With hindsight a new design of rocker cover at minimal cost may have convinced more of the 'non-technical' buyers that they were looking at something different to what had been under the bonnet of their old 1950/60's A30/A35/Morris-Minor/Mini.....etc.
When the MG Metro came along later BL did at least fit an alloy 'Minifin' rocker cover as standard!

I hired a almost brand new Y Plate 998cc Metro from 'Budget Rent-a-Car' and drove it to the South of France near St.Tropez, got near to an indicated 100 on a long downhill section of the French A6 Autoroute......a slight leak from the water pump on the return journey required regular stops for coolant level top ups though! 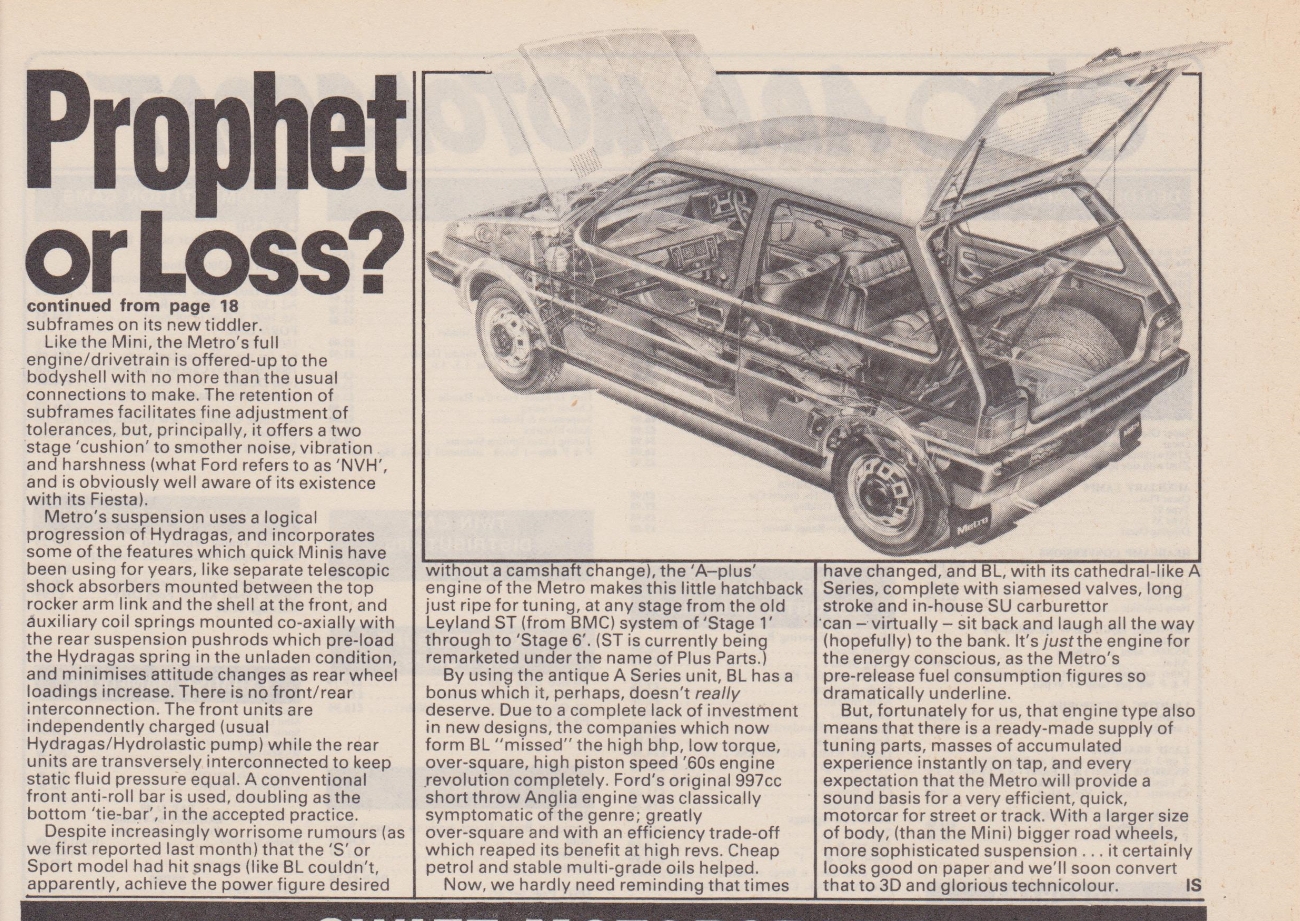 I bought a 1.3 HLS for my wife from Simpsons of Shap and collected it on the day of the launch
Dealers had been told not to release any cars for two weeks as they were trying to build stock in the showrooms
I had called in for fuel when Arthur Simpson took my wife and I into the workshop and showed us this new car
My wife fell in love with it instantly, I told her it was a load of crap and took her home very disappointed
The next day I when back and bought it he said he wasn't bothered about waiting the two weeks
Collected it very early a couple of days later which was launch day, hid it the garage with a big white ribbon round it with a bow on the roof
I went into the kitchen and told my wife the freezer in the garage had stopped working and it was full of water(probably a silly thing to do as see was heavily pregnant) see immediately rushed to see what the damage was and there was her wedding anniversary present
We went on holiday in it a couple of days later travelling to London from Cumbria and only two other metros on the road one was a BSM driving school car the other Radio London
Arthur did the same again a couple of years later with a Vanden Plas Ambassador

I got fed up with mine making a strange noise, shouted 'shut up', floored the accelerator and there was a bang!
A sparkplug had blown out and dented the bonnet outwards!
Tightened the plugs and all was well!
Relatively speaking at least!
Top

An unconventional Metro-shaped driving test:-
"Pulling into a bus stop, selecting neutral, applying the handbrake and switching off, I turned to the examiner and told him there was a problem...."
https://www.aronline.co.uk/opinion/an-u ... ving-test/
Top

Got a new Metro for Wife put her on a Caravan Holiday with the Kids with me Home & at Work .. had a call one evening from Wife she had stopped the Metro got out & locked the car to then realise the "Engine Was Still Running" .. asking how do i stop the engine

.. told her to put it in gear & stall it & try if it would engine restart .. answer yes .. but the Engine still will Not Stop even with the Ign; Key out

.. told her to take it to the local Leyland Dealer next day .. had a call next evening the Dealer has said the issue was a printed circuit board in a rear light & they would have the part next day