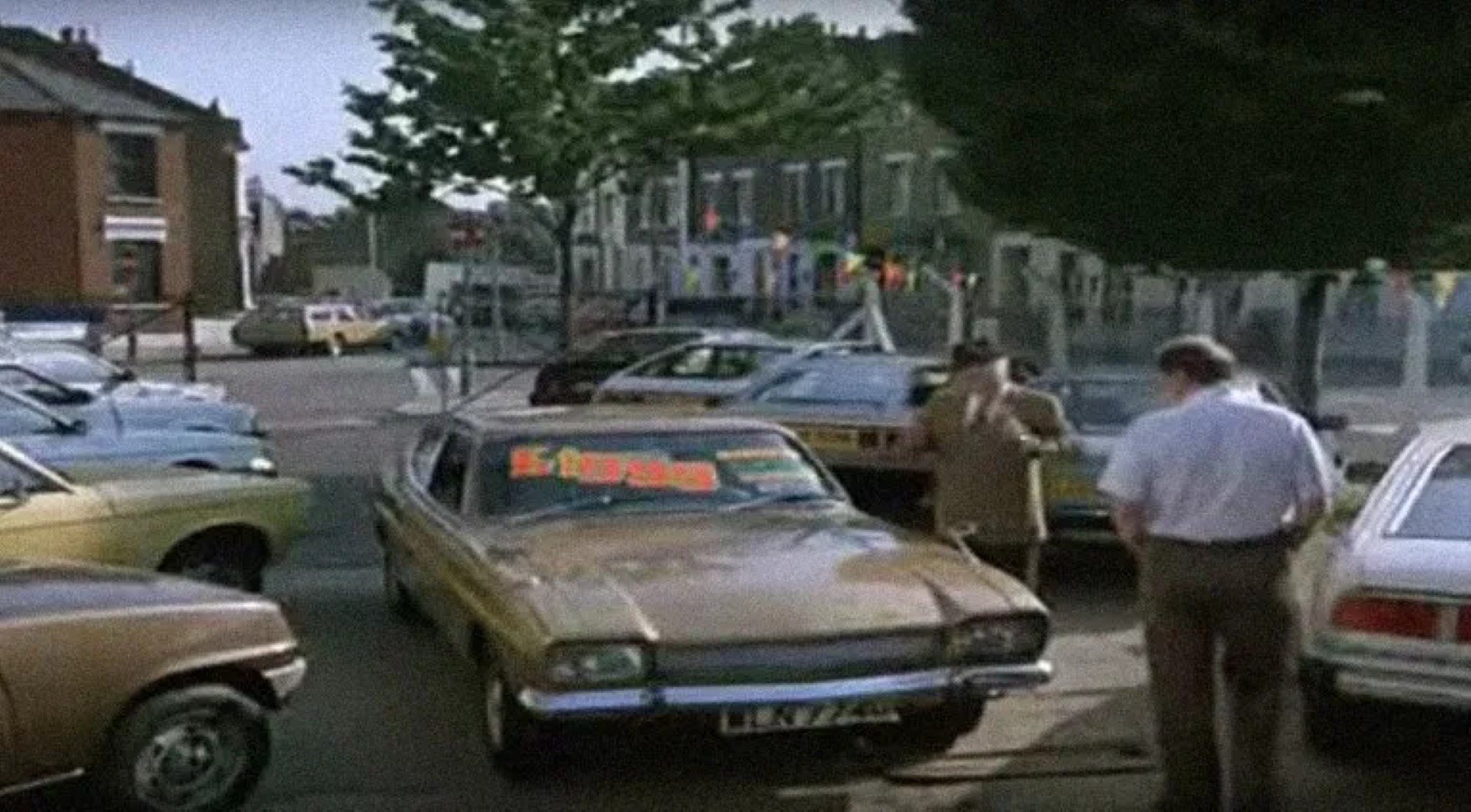 "Arthur Daley’s lot leads with a 1969/G Ford Capri Mk1 up for the princely sum of £1995. Although it was, by then, a very old car, and this one does look to have the patina of a cared-for example, it looked expensive for what it was. But imagine what you’d pay for it today. Arthur’s stock in this episode was a very mixed bag – nearest the camera is an early Renault 5, and next to that is a Hillman Avenger (50 this year!). The cars obviously fit the bill of banger fodder back then, but we’d say they’re far from that now.
On the front of the lot, it’s Rover SD1 heaven. This is clearly the executive end of the car lot, with a Series 1 nearest the camera joined by a pair of Series 2s further from camera. There’s also a nice Vauxhall Cavalier Mk2 sandwiched by two of the SD1s and, furthest away, is a Ford Sierra XR4i. Strange to think this was a typical car lot back then. It’s interesting how different it looks to the car lot Arthur was in possession of in 1979 (below) – the Capri was a Mk2, there was an X-Pack Ford Escort (originally meant to be Terry McCann’s car) an Alfa Romeo Giulia, a Fiat 132 and an Audi 100 (C1) among others. They looked several generations older!"
AROnline Memories : Arthur Daley’s car lot, London, 1985:-
https://www.aronline.co.uk/memories/london-1985/ Great post Mab, I still enjoy watching the old Minder episodes, but only the original ones with Dennis Waterman in.

Remember though, there is no 'th' in Arfur

In real life, George Cole drove a Capri when Minder was being filmed. He didn't buy a Jaguar until the mid 1990's.
Top

Down South the Escort was designated an Escort Harrier, I think they were a tarted up Mexico or 1600 sport I drove one for a very short while I always thought my 1300 Chevette was a better car.
Top

The Harrier was a 1600 Sport in silver or white with the stripes, spoilers, RS2000 seats and wheels and front spotlights. The Mexico was a different kettle of fish altogether and had a properly developed chassis.
Top

https://escortmk2harrier.webs.com/harri ... values.htm
It's like what my painter friend Donald said to me
"Stick a fork in their ass and turn them over, they're done"
Top
Post Reply
6 posts • Page 1 of 1