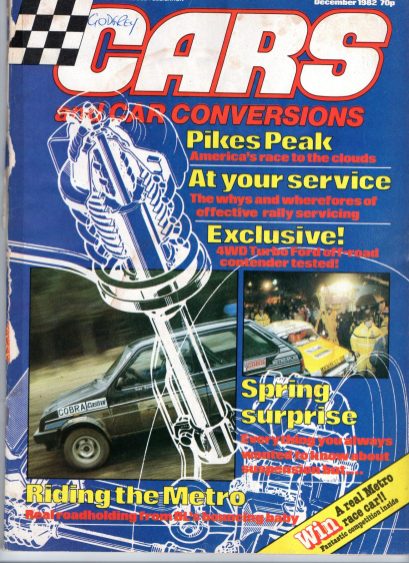 "The car in question is a 1980 Austin Metro HLS MetroPlus pre-production model and it was a prototype/concept MetroPlus model built by BL Motorsport at Abingdon. The car was built as a proof of concept for the MetroPlus/Plusparts package that was to be launched with the Metro. It was a performance and styling package, which you could buy and fit to a standard Metro – and was all the rage in the late 1970s and early ’80s.
The styling kit included front spoiler and wheelarch kit, side stripes, bucket seats, sports steering wheel, map light, leather gearknob, and alloy wheels. The performance kit included alloy inlet manifold with Weber carburettor, freeflow exhaust system, alloy PlusParts rocker cover and oil cooler kit.
So what happened to this car, and how did it manage to survive? After the MetroPlus concept fell through, the prototype was purchased directly from BL Motorsport at Abingdon by Dr Dave Bulman, who was a Senior Lecturer at the Royal College of Science and a special technical liaison adviser to BL Motorsport. He stripped the car down to a bare shell and rebuilt it for rally/competition use. The car’s build was featured in several issues of Car & Car Conversions magazine, and would subsequently become known as the Triple C/Cobra Metro."
More on AROnline:-
https://www.aronline.co.uk/cars/austin/ ... prototype/

Martin, a very interesting car without doubt. The British Leyland ex-works rallycross Metro is over here in Northern Ireland which is also a rare child. The Metro was a very good car in motorsport, I remember Dave Pritchard having a super quick white Metro and beating all the Minis in rallycross